Seeing the Impact of Strikes and Abolition Through the UC Strike 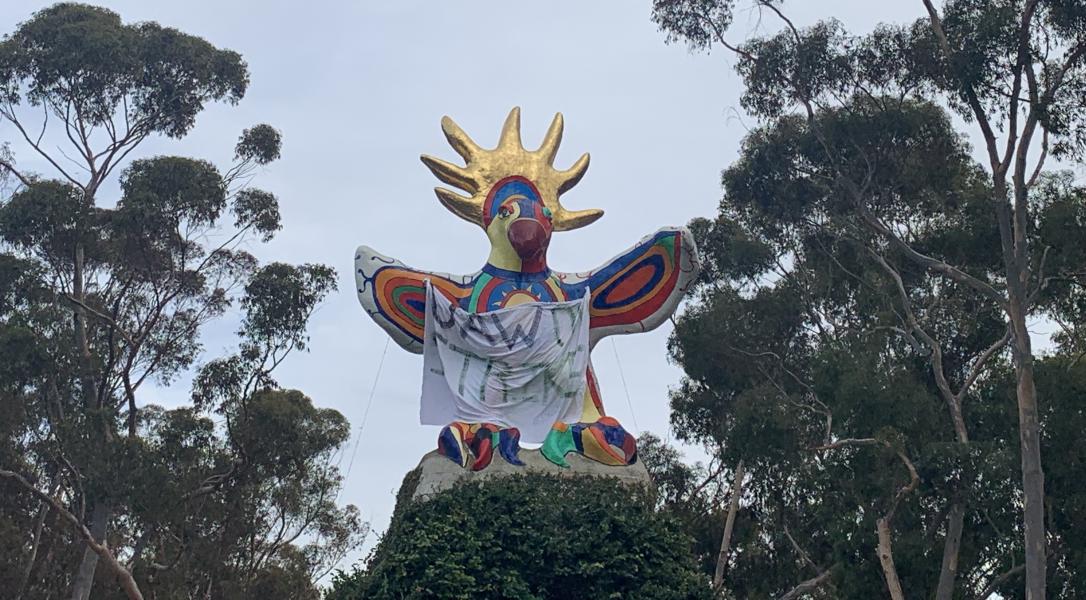 As of November the 14th 2022, tens of thousands of University of California academic workers—consisting of post-docs, academic student employees, academic researchers, and graduate student researchers—went on strike. Not only is this the largest academic workers strike in the history of this country, but it is also the first time post-docs have gone on strike.  As I am currently working on my physics PhD at the University of California San Diego, I—along with most of my friends and peers—have been on strike for a week (sixteen days at the time of writing, tenth of actively picketing) and it has brought into stark focus how mistreated the academic workers body has been by the UC. Currently, we are fighting for wages that prevent us from being rent burdened by the housing that UC sells to us, for protections against bullying and discrimination by our advisors, for paid time off, for adequate childcare assistance, and for affordable access to transit. The UC system has seen these demands and stalled to the point that a strike was necessary, presumably hoping that their workers would lose interest and fall back in line. This did not happen. During the last week of picketing (on the UCSD campus as this is where I have direct knowledge) academic workers have prevented deliveries, blocked intersections, broken up conferences, and surrounded the faculty club trapping the chancellor who is partly responsible for the unlawful bargaining practices of the UC for four hours. Unfortunately, the UC is still trying to wait us out, offering as few concessions as possible, but revamping their bargaining schedule to near every day instead of every week or so. This shift in behavior from the UC’s bargaining team seems to imply that the academic workers strike may be set to reshape how higher education interacts with its workers, setting precedents which could have lasting effects across the country. In fact, at of the beginning of this week, a tentative agreement has been reached between the UC and its postdocs, although the postdocs will continue striking in solidarity with the other members of the union, it is a huge step forward in reaching peace, and bringing campuses back to normal.

This will not be the first time a labor strike has changed the face of employment in the US. Unions and striking has achieved minimum wage, the weekend, the 40 hour work week, and many other quality of life policies which we take for granted today. These changes were of course not very popular with employers and corporations and many want to prevent further victories on the employees’ end. For this reason, it is important to understand the history and effects of labor unions and movements. Everything from the Triangle Shirtwaist factory strike, to the current University of California strikes provides context and clarity to how employees and employers interact and how the constant struggle between them can either be fairly rectified, or unreasonably ignored. In the case of the Triangle Shirtwaist factory, the workers’ demands were ignored and the safety concerns that partly triggered the strikes were never resolved, and as a result 146 people died due to being locked in a burning factory. This led to major revisions to workplace safety law, preventing future employers to subject their workers to such unfair and unsafe conditions.

There have been many other impactful labor movements throughout history, but this year is historically meaningful in and of itself. There have been well over 100 strikes in this year alone, across all industries, the working class is showing that we cannot be taken advantage of, and despite the proliferation of anti-union rhetoric of parts of the GOP history has shown that the organization of large numbers of people united for a common goal results in improvements to quality of life across the board. In order to wade past the misinformation, we can read, and learn about the history of labor strikes, and abolition in general. Being a bookstore, BookPeople of Moscow can furnish a wide array of literature to help with this learning. Additionally, Moscow was where I started my own small history of activism with the Black Lives Matter marches in 2020, so I feel that using BookPeople’s platform as a way to recommend resources for learning about abolition and labor movements is a timely way of getting back to my roots. Now, without further ado, the following can be divided into general abolition and activism topics, and specific labor union topics, both are important in understanding the significance and impact of the current strikes, and how a ruling class often attempts to oppress those that work for or with them, my description of why I am suggesting a give book is given first, and then the link to purchase a book is below that. I’ll first list our general abolition book suggestions:

I included this book because it provides a look at how movements can ebb and flow throughout time and gives a great illustration of how one in the modern world can arrive at the need for activism.

We are Power gives a snapshot of many different nonviolent movements and their effect on history. It shows that often the power of the people is enough to enact positive change. Additionally, it provides a well-furnished bibliography for further exploration.

Kids on the March

This book provides a collection of marches and protests which show that even children have the power to organize for change. Also, Kids on the March is written for an age range of 10-14 so it is at a level that those who are just becoming aware of the world’s problems can understand its message and the stories’ historical significance.

Our final general abolition recommendation is one which is designed to inspire and instruct one on the decisions to make in your day to day life to enact positive change in the world. It takes the guess work out of finding the “right” way to spend, and it yet again shows that even small changes can add up.

In addition to understanding the importance of general abolition, and how it can enact change in many areas of society, it is also important to understand how labor unions interact with employers, and the system as a whole. There is a lot of rhetoric in the modern world that has begun to convince members of the working class that a union is no needed, or even something to be desired, this is often due to misinformation proliferated by those expressly interested in oppressing the working class. To combat this, we can learn about the history of striking, and try to draw our own opinion on when and why a union and the associated striking would be necessary. The following recommendations are books which can be ordered over the website to you, or the store which will help build a fuller picture of the reality of labor movements:

Prelude to Revolution: France in May 1968

An interesting look at the demonstrations and strikes in France that started when university students demonstrated against capitalism, and consumerism, however violent police involvement led labor unions to sympathy strike, eventually forcing the entire French economy to shut down. This gives historical evidence that labor strikes can occur for reasons other than trying to force the “poor” employer to pay fair wages.

Detroit: I Do Mind Dying

An important piece on both labor movements and racial injustice. It provides a good study on how social issues can intertwine and how movements can intersect.

As the academic workers continue picketing, and withholding their work, it is important to remember that these demonstrations are important, not only to those participating, but also in continuing our nation’s history of workers standing up for their rights. The books recommended above all give evidence for how the nation has been shaped, and how the entire working class benefits from the actions of labor movements, as I return to the picket line, I hope that these books help whoever finds this article see the impact, and power of people united under a common goal.

Becoming Abolitionists: Police, Protests, and the Pursuit of Freedom (Paperback)

ISBN: 9781662601668
Availability: This book is backordered at the warehouse. When you order, we'll contact you with more info about availability.
Published: Astra House - October 4th, 2022

One of the New York Times' 6 New Paperbacks to Read

Now in paperback and with new material, a 2021 Kirkus Best Book of the year in both Nonfiction and Current Events, the book Naomi Klein called: “a triumph of political imagination and a tremendous gift to all movements struggling towards liberation.”

We Are Power: How Nonviolent Activism Changes the World (Hardcover)

ISBN: 9781419741111
Availability: This book was in stock at the store 24 hours ago but could have sold since then. Please call to confirm if your order is urgent.
Published: Abrams Books for Young Readers - April 7th, 2020

A stirring look at nonviolent activism, from American suffragists to Civil Rights to the Climate Change Movement

We Are Power brings to light the incredible individuals who have used nonviolent activism to change the world. The book explores questions such as what is nonviolent resistance and how does it work?

Kids on the March: 15 Stories of Speaking Out, Protesting, and Fighting for Justice (Hardcover)

ISBN: 9781643751009
Availability: This book was in stock at the store 24 hours ago but could have sold since then. Please call to confirm if your order is urgent.
Published: Algonquin Young Readers - March 23rd, 2021

From the March on Washington to March for Our Lives to Black Lives Matter, the powerful stories of kid-led protest in America.

Wallet Activism: How to Use Every Dollar You Spend, Earn, and Save as a Force for Change (Paperback)

ISBN: 9781953295590
Availability: This book was in stock at the store 24 hours ago but could have sold since then. Please call to confirm if your order is urgent.
Published: BenBella Books - November 16th, 2021

Prelude to Revolution: France in May 1968 (Paperback)

Daniel Singer is the left's most brilliant arsonist. He sets ablaze whole forests of desiccated clich's about 'the end of history' and 'the triumph of the market' in order to light the way forward for the next generation of radical thinkers and activists.--Mike Davis

An essential firsthand account of the May 1968 upheaval in France.

Detroit: I Do Mind Dying: A Study in Urban Revolution (Paperback)

Detroit: I Do Mind Dying tracks the extraordinary development of the Dodge Revolutionary Union Movement and the League of Revolutionary Black Workers as they became two of the landmark political organizations of the 1960s and 1970s. It is widely heralded as one the most important books on the black liberation movement.

"There's a time when the operation of the machine becomes so odious, makes you so sick at heart, that you can't take part You can't even passively take part And you've got to put your bodies upon the gears and upon the wheels ... upon the levers, upon all the apparatus, and you've got to make it stop "