Finding Magic this Fall as a Woman 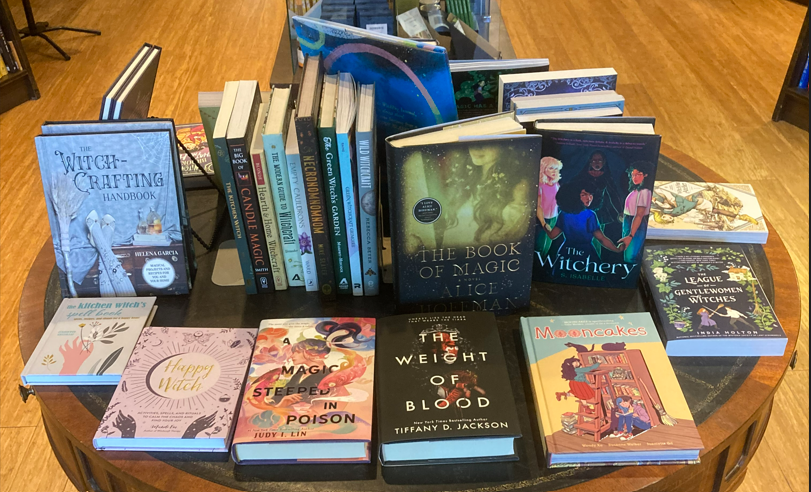 There are a few months in the year where we don’t have enough shelf space for all the displays
I’d like to do, and October is easily one where I can find myself getting carried away with any
number of themes. Here in Idaho the biggest holiday is Halloween, but there’s also the Day of
the Dead, Día de los Muertos, which begins just after November 1 st and goes through
November 2 nd . October is now also recognized as Hispanic Heritage Month, which is an easy
way for our staff to highlight some of the books that we’re already recommending and highlight
others that may otherwise be a little lost on the shelf without some help (in our store at least).
Large amounts of literary prizes are given out this month including the winner of the Booker
Prize, winners of the Kirkus Prize, Shirley Jackson Award winners, and the finalists are
announced for the National Book Awards.
It’s a month of official change if you live in a seasonal location, and Moscow seemingly
goes from warm light layers to sweater weather overnight. To say it’s one of my favorite times
of the year feels a little lackluster. There’s something magical about the world changing around
me as my routine stays the same. The concrete is still hard under my feet only now it’s
accompanied by the sound of crunching leaves and frosty breaths. My local commuting crowd
that leaves at the same time as I do are still the same people just bundled up in jewel toned
hats and scarves. The sun may set earlier, but downtown the strings of Christmas lights flung
around the trees, up year-round, now have a hazy mystical feeling to them as I take the long
way home.
However, as I walked this year, I found myself thinking about being a woman
and how I didn’t feel particularly magical this year. I just felt angry. And underneath my anger I
felt disappointment and sadness. So, I focused my feelings as best I could. I stewed and boiled
and baked on the decisions of the courts this year and then I toiled and troubled and like a hell-
broth boiled and bubbled and came to the conclusion that if I felt a little less magical this year
then there had to be others that felt the same.
This was when I read Alice Hoffman’s Practical Magic for the first time. A regular
customer loaned it to me after stating it was her favorite book of all time and she’d read it no
less than six times. From the first paragraph I was hooked.

“For more than two hundred years, the Owens women have been blamed for everything
that has gone wrong in town. If a damp spring arrived, if cows in the pasture gave milk
that was runny with blood, if a colt died of colic or a baby was born with a red birthmark
stamped onto his cheek, everyone believed that fate must have been twisted, at least a
little, by those women over on Magnolia Street. It didn’t matter what the problem
was—lightning, or locusts, or a death by drowning. It didn’t matter if the situation could
be explained by logic, or science, or plain bad luck. As soon as there was a hint of trouble
or the slightest misfortune, people began pointing their fingers and placing blame.
Before long they’d convinced themselves that it wasn’t safe to walk past the Owens
house after dark, and only the most foolish neighbors would dare to peer over the black
wrought-iron fence that circled the yard like a snake.”

The line about “logic, or science, or plain bad luck” that stuck out to me most after this past
year and broke my heart. But books can mend things back together in ways that we don’t get in
real life. The Owens women are a real family, a real sisterhood, and they hold each other
together in ways that our modern society has failed to hold women up and together.
When September started coming around, I began looking to see how many books on
magic and witches I could find that were already on our store’s shelves. I limited my front table
display at first to fictional books featuring magical women, and then opened it up even further
to include kids’ books, nonfiction books on tarot and spell casting, green witchcraft, and
eventually as my front table started selling out adding candles, coloring books and modern
magician stories. This is only the second year that we’ve been doing monthly rotating displays
and so I’m still testing the waters to see if these themes work better when we limit them to
specific genres or if we open them to as many as possible, but there are some that surprise me
at how fast they get emptied and this month was one of those times.
Below are 10 of my own personal picks of books featuring magical women that I highly
recommend (in no particular order) with a short summary attached:
1. The House of Spirits by Isabel Allende

- One of the most important novels of the twentieth century, The House of the Spirits is an
enthralling epic that spans decades and lives, weaving the personal and the political into a
universal story of love, magic, and fate.

2. The Lost Apothecary by Sarah Penner
- With crackling suspense, unforgettable characters and searing insight, The Lost Apothecary is a
subversive and intoxicating debut novel of secrets, vengeance and the remarkable ways women
can save each other despite the barrier of time.

3. The Once and Future Witches by Alix E. Harrow
- An homage to the indomitable power and persistence of women, The Once and Future
Witches reimagines stories of revolution, motherhood, and women&#39;s suffrage—the lost ways
are calling.

5. White Magic by Elissa Washuta
- In this collection of intertwined essays, she writes about land, heartbreak, and colonization,
about life without the escape hatch of intoxication, and about how she became a powerful
witch.

6. The History of Wild Places by Shea Ernshaw
- Travis Wren has an unusual talent for locating missing people. Often hired by families as a last
resort, he takes on the case of Maggie St. James—a well-known author of dark, macabre
children’s books—and is soon led to a place many believed to be only a legend.

7. This Poison Heart by Kalynn Bayron
- Darkness blooms in bestselling author Kalynn Bayron&#39;s new contemporary fantasy about a girl
with a unique and deadly power.

8. The Memory Thief (Thirteen Witches #1) by Jodi Lynn Anderson
- Perfect for fans of The Girl Who Drank the Moon, this fantastical and heartfelt first book in a
new trilogy from critically acclaimed and New York Times bestselling author Jodi Lynn Anderson
follows a girl who must defeat thirteen evil witches.

10. Slewfoot: A Tale of Bewitchery by Brom
-An ancient spirit awakens in a dark wood. The wildfolk call him Father, slayer, protector. The
colonists call him Slewfoot, demon, devil.

I wanted to bring some magic back into my life this October, and I hope for those of you
that came by the store that you got to take a little bit of it home with you as well. It’s by no
means all of the books on magical women in the store that we’ve got. I’m happy to say there’s
far too many who’ve been published than our little entry table can hold.

“Spectacular...An absorbing and distinguished work...The House of the Spirits with its all-informing, generous, and humane sensibility, is a unique achievement, both personal witness and possible allegory of the past, present, and future of Latin America.” —The New York Times Book Review

The Once and Future Witches (Paperback)

"A gorgeous and thrilling paean to the ferocious power of women. The characters live, bleed, and roar.

The Inheritance of Orquídea Divina: A Novel (Paperback)

Perfect for fans of Alice Hoffman, Isabel Allende, and Sarah Addison Allen, a family searches for the truth hidden in their past in this “expertly woven tale of family power, threaded with as much mystery as magic” (V.E. Schwab, #1 New York Times bestselling author).

The Montoyas are used to a life without explanations.

Longlisted for the PEN/Jean Stein Award

“Beguiling and haunting. . . . Washuta's voice sears itself onto the skin.” —The New York Times Book Review

A History of Wild Places: A Novel (Hardcover)

In this “riveting, atmospheric thriller that messes with your mind in the best way” (Laini Taylor, New York Times bestselling author), three residents of a secluded, seemingly peaceful commune investigate the disappearances of two outsiders.

Travis Wren has an unusual talent for locating missing people.

Darkness blooms in bestselling author Kalynn Bayron's new contemporary fantasy about a girl with a unique and deadly power.

Briseis has a gift: with a single touch she can grow plants from tiny seeds to rich blooms.

Perfect for fans of The Girl Who Drank the Moon, this fantastical and heartfelt first book in a new trilogy from critically acclaimed and New York Times bestselling author Jodi Lynn Anderson follows a girl who must defeat thirteen evil witches

The Witch-Crafting Handbook: Magical projects and recipes for you and your home (Hardcover)

ISBN: 9781787137837
Availability: This book was in stock at the store 24 hours ago but could have sold since then. Please call to confirm if your order is urgent.
Published: Quadrille Publishing - October 12th, 2021

Over 70 projects for stylish witches to make at home.

Wicked Baker, Helena Garcia, is back with a new book to help you witch-craft your way to a more magical life, with creative projects for you and your home.

Slewfoot: A Tale of Bewitchery (Hardcover)

Set in Colonial New England, Slewfoot is a tale of magic and mystery, of triumph and terror as only dark fantasist Brom can tell it.

Connecticut, 1666: An ancient spirit awakens in a dark wood. The wildfolk call him Father, slayer, protector.