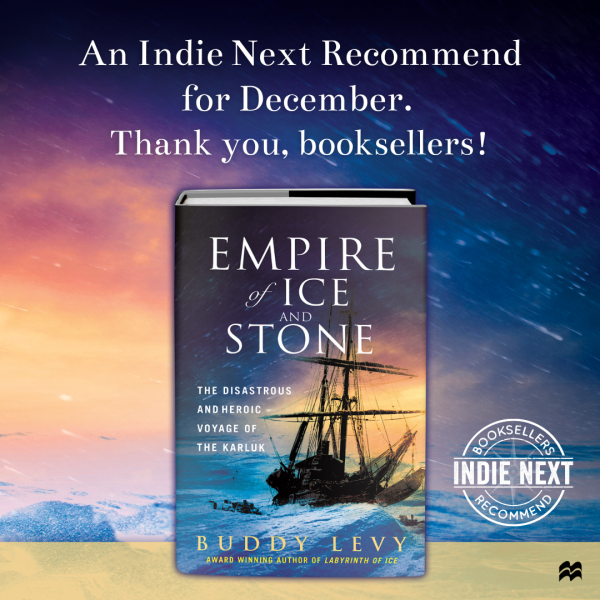 Please join us for an evening with Buddy Levy including an author talk, slideshow, and book signing! Award-winning and bestselling author Buddy Levy will discuss his new book Empire of Ice and Stone: The Disastrous and Heroic Voyage of the Karluk at 7pm on Wednesday, December 7, at the Kenworthy Performing Arts Center in downtown Moscow. Books are available NOW for pre-ordering from BookPeople of Moscow. Scroll to the bottom of this page to order ahead. The event is free and open to the public.

In the summer of 1913, the wooden-hulled brigantine Karluk departed Canada for the Arctic Ocean. At the helm was Captain Bob Bartlett, considered the world’s greatest living ice navigator. The expedition’s visionary leader was a flamboyant impresario named Vilhjalmur Stefansson hungry for fame.

Just six weeks after the Karluk departed, giant ice floes closed in around her. As the ship became icebound, Stefansson disembarked with five companions and struck out on what he claimed was a 10-day caribou hunting trip. Most on board would never see him again.

Twenty-two men and an Inuit woman with two small daughters now stood on a mile-square ice floe, their ship and their original leader gone. Under Bartlett’s leadership they built make-shift shelters, surviving the freezing darkness of Polar night. Captain Bartlett now made a difficult and courageous decision. He would take one of the young Inuit hunters and attempt a 1000-mile journey to save the shipwrecked survivors. It was their only hope.

Set against the backdrop of the Titanic disaster and World War I, filled with heroism, tragedy, and scientific discovery, Buddy Levy's Empire of Ice and Stone tells the story of two men and two distinctively different brands of leadership: one selfless, one self-serving, and how they would forever be bound by one of the most audacious and disastrous expeditions in polar history, considered the last great voyage of The Heroic Age of Discovery. 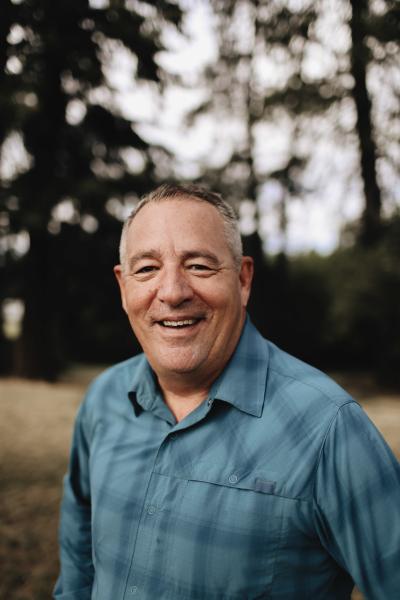 Buddy Levy is the author of eight books and his work has been featured or reviewed in The New York Times, The Wall Street Journal, NPR, TIME, USA Today, The Washington Post, The Washington Times, Kirkus Book Reviews, Publisher’s Weekly, Booklist, The Daily Beast, The A.V. Club and Library Journal. He was the co-star, for 25 episodes, on HISTORY Channel’s hit docuseries Brad Meltzer’s DECODED, which aired to an average of 1.7 million weekly viewers and is still airing as reruns today. In 2018 he was an on-camera expert on the 4-part TV Series THE FRONTIERSMEN: The Men Who Built America (HISTORY, Executive Producer Leonardo Di Caprio).

Levy’s most recent book is the forthcoming Empire of Ice and Stone: The Disastrous and Heroic Voyage of the Karluk (St. Martin’s Press, December 6, 2022). His book Labyrinth of Ice: The Triumphant and Tragic Greely Polar Expedition (St. Martin’s Press, 2019) won the Banff Mountain Book Festival Award for Adventure Travel and a National Outdoor Book Award for history. Levy is the author of the National Bestseller No Barriers: A Blind Man’s
Journey to Kayak the Grand Canyon (with Erik Weihenmayer; Thomas Dunne Books, 2017); GERONIMO: The Life and Times of An American Warrior (co-authored with Coach Mike Leach, Simon & Schuster, 2014) and River of Darkness: Francisco Orellana’s Legendary Voyage of Death and Discovery Down the Amazon (Bantam Dell, 2011).  His other books include the critically acclaimed Conquistador: Hernan Cortes, King Montezuma, and the Last Stand of the Aztecs (Bantam Dell, 2008), which he is currently developing for a television series; American Legend: The Real-Life Adventures of David Crockett (Putnam, 2005, Berkley Books, 2006); and Echoes On Rimrock: In Pursuit of the Chukar Partridge (Pruett, 1998). His books have been published in eight languages.

As a freelance journalist Levy has covered adventure sports and lifestyle/travel subjects around the world, including working with TV impresario Mark Burnett on numerous Eco-Challenges, and other adventure expeditions in Argentina, Borneo, Europe, Greenland, Morocco, and the Philippines. His interests are wide-ranging: discovery and adventure, the mountain men, arctic exploration travail, clashes of empires and civilizations, conspiracy theories, and riveting human stories of survival.

Empire of Ice and Stone: The Disastrous and Heroic Voyage of the Karluk (Hardcover)

The true, harrowing story of the ill-fated 1913 Canadian Arctic Expedition and the two men who came to define it.