The Habits of Unity - 12 Months to a Stronger America...One Citizen at a Time: Together, we uplift ourselves and heal the country we share (Paperback) 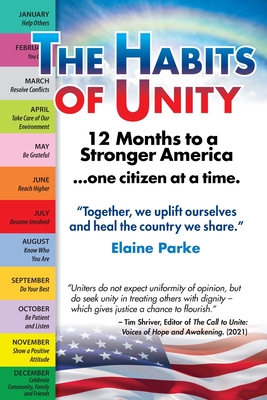 The Habits of Unity - 12 Months to a Stronger America...One Citizen at a Time: Together, we uplift ourselves and heal the country we share (Paperback)

America has almost never been more divided. Author Elaine Parke, MBA, CS, CM, NSA, believes the core problem is that our founders created a Bill of Rights but failed to write a Bill of Responsibilities. To be a healthy nation, citizens, as individuals, must also unite around the daily practice of democratic ideals. This doesn't mean we all think alike. It does mean we treat others equally, and with dignity, respect, and kindness.

The Habits of Unity: 12 Months to a Stronger America...One Citizen at a Time is a one-minute-a-day action guide to a better life and a more empowered citizenship. Each of the twelve months of the year is branded with one colorful habit-forming value like resolve conflicts, help others, and be more positive. When practiced daily by patriots, these 12 unity habits emerge as a citizens "Bill of 12 Responsibilities" that make life better for everyone.

As a former corporate executive whose job was in part to help people get along better, Parke came up with this one-minute-at-a-time, one-value-a-month game plan. She's been teaching it in schools and communities for thirty years-and seeing results. Nine independent studies have evaluated it and found it connected people and that individual behaviors improved. The London Institute named it a Social Invention. This isn't a book about habits-it is a habit-forming book.