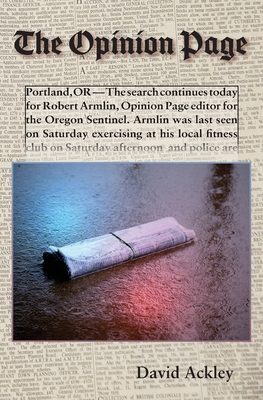 The Portland Police Bureau is already busy searching for four-year-old Melissa Davidson who was abducted from a local shopping mall, when one of Portland's well-known newspaper editors goes missing as well. Detective Galen Young is tasked with locating Robert Armlin, the Opinion Page editor of the Oregon Sentinel, in addition to joining the search for the missing girl. After interviewing Armlin's wife, work colleagues, and friends, Detective Young finds that he has little to go on in tracking down the editor, so he delves into the opinion pieces Armlin had written in the past to gain more insight into the man and any enemies he may have made. In response to many of the published articles are letters to the editor from readers who took offense at, or strongly disagreed with, many of Armlin's statements and positions. Detective Young begins to suspect that one of the respondents could have had a hand in the editor's disappearance. The detective himself opposes many of Armlin's political views, but Young often finds himself persuaded by the editor's well-presented arguments, causing him to reflect on his own beliefs.

Little progress is being made in locating either Melissa Davidson or Robert Armlin when a discovery is made that appears to link the two missing persons cases. As improbable as this seems, the Bureau is left struggling to find possible motives and connections, only to be surprised by another unexpected revelation.

Detective Young is a retiree from the Pendleton, Oregon police department, but after his wife and he move to Portland, he finds it necessary to join the Bureau in order to make ends meet in the more expensive city. His eldest daughter is currently incarcerated for drug possession in a nearby corrections facility, leaving it up to him and his wife to raise her two middle school-aged sons, adding to the older couple's expenses and responsibilities. The make-shift family is just managing this arrangement when a sudden tragedy strains their relationships to near the breaking point.