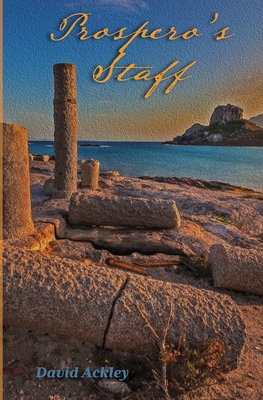 Whatever became of Prospero's enchanted staff after he snapped it in two and buried it 'certain fathoms in the earth' in Shakespeare's play The Tempest?

It was only a prop in a play, after all, so why was the staff now appearing to Martin Ropers? Martin had returned to a Greek island, trying to rekindle the spark that led to his highly successful first novel written in the '70s, but shortly into his trip he'd discovered the ancient staff and immediately lapsed into a coma. He would soon awaken to the persistent image in only one eye of a desolate island-where he grasps the staff.

Back home in Montana, Martin's situation takes a Shakespearean turn when he's stranded in his house with neighbors seeking shelter from a mysterious wildfire that has erupted on the ridge just above them. His troubles deepen when he must contend with a painful, life-threatening condition within his brain and, to make matters worse, his literary agent and close friend has announced that she's cutting her ties with him. Martin needs just one more successful book to turn his life around, but his damaged brain-and the staff-seem to have other plans.