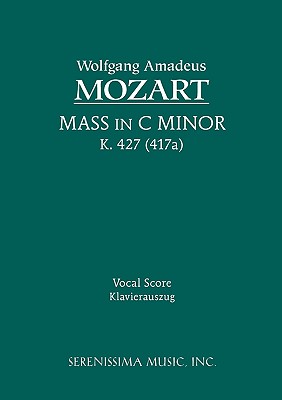 A new, digitally-enhanced reissue of the classic vocal score for Alois Schmitt's reconstruction of Mozart's incomplete masterpiece. Includes preface, contents, instrumentation, measure numbers. Fully compatible with the parts from Breitkopf, Kalmus, Lucks or even the free download from IMSLP. Originally planned for a celebration of his wedding to Constanze Weber, Mozart performed the several completed sections on Oct. 26, 1783 in Salzburg - filling in with movements from earlier liturgical works. Later, the composer used several sections of this music in his 1785 oratorio Davidde Penitente with new words. Inspired by S ssmayr's completion of the "Requiem", Schmitt filled in missing sections with movements from earlier masses and fleshed out the orchestration from Mozart's sketches where needed. His reconstruction was given its premiere in 1901 and promptly entered the choral repertoire. Matching large conductor's score and orchestral parts are also available from Serenissima Music (92699).