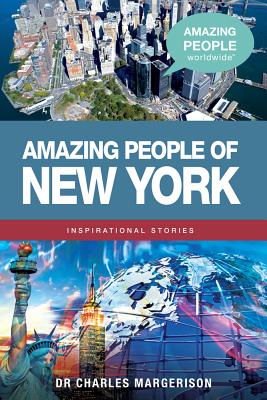 
Ask us a question if anything isn't clear. Thanks!
Amazing People Worldwide® takes you on a walk around New York City. You will travel in the footsteps of inspirational people including George Washington, Mark Twain, Sojourner Truth, Irving Berlin, John D. Rockefeller and Susan B. Anthony. In their different ways, they made major contributions to New York, making the city what it is today. A city tour unlike any other, ‘Amazing People of New York’ takes you on a fascinating journey through the history of one of the world's most visited cities. You will meet those who contributed to the music, the business, the fight for civil rights, the transport and other vital aspects of the city's life. Come face to face with iconic figures associated with what John Fitzgerald called "The Big Apple" through BioViews®. A BioView® is a short biographical story, similar to an interview. These great stories provide an easy way of learning about amazing people who made major contributions and changed our world.
Educational psychologist and entrepreneur, Dr Charles Margerison, created the concept for the Amazing People series during a visit to Stratford-upon-Avon, when he wondered what Shakespeare might say if he was interviewed about his life achievements. The series now features the stories of over 500 amazing people. As well as working in educational institutions for many years, Dr Margerison has consulted widely for global organizations. He was previously Professor of Management at Cranfield University, UK, and the University of Queensland, Australia. The author of numerous books, Dr Margerison is a member of the Royal Institution and the Royal Society of Literature.