Fall from the Sky: The Descent of Boeing and the 737 MAX (Paperback) 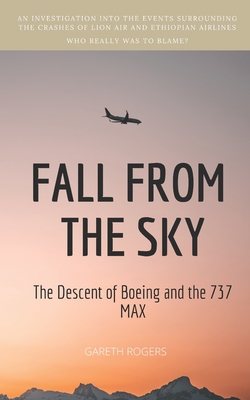 Fall from the Sky: The Descent of Boeing and the 737 MAX (Paperback)


Estimated arrival to store from West coast warehouse: 2 days. From East coast warehouse: 8 to 10 days.
This book is non-returnable. We will confirm your order with you before placing to be sure you acknowledge and accept.
With estimated losses of $18.6 billion, the grounding of its most popular aircraft and the lowest request for new orders in two decades, the world's largest plane manufacturer has seen its reputation and value plummet since 2019. This unprecedented descent follows two fatal crashes of Boeing's best-selling aircraft, the 737 MAX. The terrifying events of Lion Air Flight JT610 and Ethiopian Airlines Flight ET302 claimed over 346 lives and raised serious questions about the safety and culture of the Boeing organisation. FALL FROM THE SKY investigates the pilots, the airlines and the Boeing organisation in an attempt to identify the factors that led to these inadmissible accidents and expose who really is to blame.