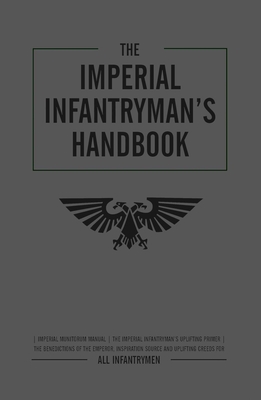 
Ask us a question if anything isn't clear. Thanks!
The ultimate introduction to life as an Imperial Guardsman!

Welcome to the Astra Militarum, Guardsman! You don't know it yet, but this book is your new best friend. In its pages, you'll find everything you need to know in order to defeat mankind's enemies and prove yourself worthy of being a trooper in the Imperial Guard. It'll teach you how to march, how to shoot, how to maintain your weapons (and how to request replacements if you misplace yours), and much more. Learn the prayers and benedictions that will protect you from your foes, and how to best kill each of the Imperium's enemies with minimum effort. It's the essential guide for every Guardsman.

CONTENTS
Imperial Munitorum Manual
Imperial Infantryman's Uplifting Primer
The Benedictions of the Emperor
Graham McNeill has written more Horus Heresy novels than any other Black Library author. His canon of work includes False Gods, Vengeful Spirit and his New York Times bestseller A Thousand Sons. Graham’s Ultramarines series, featuring Captain Uriel Ventris, is now six novels long, and he has also written the Forges of Mars trilogy featuring the Adeptus Mechanicus. For Warhammer, he has written The Legend of Sigmar trilogy, the second volume of which won the 2010 David Gemmell Legend Award.