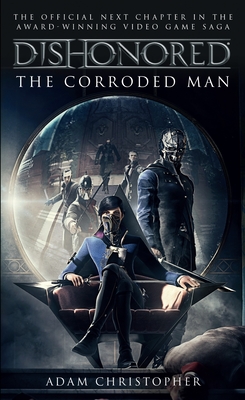 
Estimated arrival to store from West coast warehouse: 2 days. From East coast warehouse: 8 to 10 days.
A strange, shrouded figure appears in Dunwall, seeming to possess powers once wielded by the assassin known as Daud. Faced with the possibility that their deadliest foe has returned, Emily and Corvo plunge headlong into a life-and-death race against time. If they fail to learn the truth about this mysterious enemy, the result could be destruction on an unimaginable scale.
Adam Christopher is novelist, comic writer, and award-winning editor. Adam is the author of The Burning Dark and the forthcoming LA Trilogy, as well as co-writer of The Shield for Dark Circle Comics. His debut novel, Empire State, was SciFiNow’s Book of the Year and a Financial Times Book of the Year for 2012. Born in New Zealand, he has lived in Great Britain since 2006.
"Dishonored lore and a crafty villain, coupled with Emily growing into a woman and her relationship with Corvo will make for an interesting and enjoyable read" - Xbox Addict

“Dishonored – The Corroded Man was a wonderful novel that brought me excitement to play Dishonored 2 this November, and learn more about Emily and Corvo as they progress.” - Gamers Sphere

“Not only highlights the feeling of the Dishonored games, but also tells an interesting story” - Hey Poor Player