The I Ching Pack: Divining the Future Using the Ancient Book of Chinese Wisdom (Paperback) 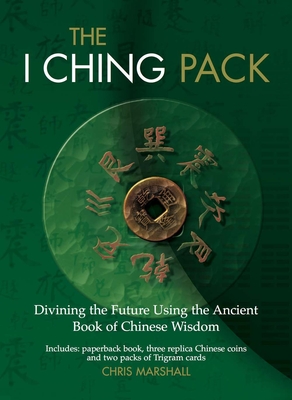 The I Ching Pack: Divining the Future Using the Ancient Book of Chinese Wisdom (Paperback)


Ask us a question if anything isn't clear. Thanks!
The ancient Chinese art of I Ching is as relevant today as ever--and The I Ching Pack helps you gain a fresh perspective on any problem. This unique kit contains a book, two packs of cards, and three special oracle coins: throw the coins six times, and consult the charts to find the interpretation. You're ready to make the right decision for your future.
Chris Marshall is an esoteric writer working in both Britain and Europe, and a student of many occult fields. He has been the astrologer for Marie Claire magazine in Britain and Germany, and writes regular special features and articles for many national magazines. He has been interviewed on British television and contributed to various television programs. In addition to writing and teaching, Chris gives private consultations in various techniques, including astrology, Tarot, and the I Ching. He has spent several years studying a wide range of spiritual techniques and has run workshops and given lectures from Iceland to Europe.