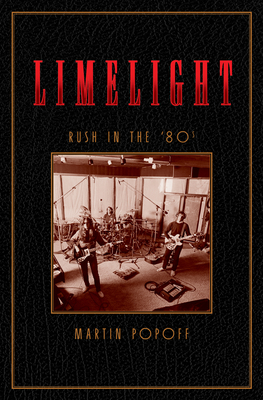 
Estimated arrival to store from West coast warehouse: 2 days. From East coast warehouse: 8 to 10 days.
Part two of the definitive biography of the rock 'n' roll kings of the North -- covering Rush's most iconic and popular albums, Moving Pictures and Power Windows Includes two full-color photo inserts, with 16 pages of the band on tour and in the studio In the follow-up to Anthem: Rush in the '70s, Martin Popoff brings together canon analysis, cultural context, and extensive firsthand interviews to celebrate Geddy Lee, Alex Lifeson, and Neil Peart at the peak of their persuasive power. Rush was one of the most celebrated hard rock acts of the '80s, and the second book of Popoff's staggeringly comprehensive three-part series takes readers from Permanent Waves to Presto, while bringing new insight to Moving Pictures, their crowning glory. Limelight: Rush in the '80s is a celebration of fame, of the pushback against that fame, of fortunes made -- and spent ... In the latter half of the decade, as Rush adopts keyboard technology and gets pert and poppy, there's an uproar amongst diehards, but the band finds a whole new crop of listeners. Limelight charts a dizzying period in the band's career, built of explosive excitement but also exhaustion, a state that would lead, as the '90s dawned, to the band questioning everything they previously believed, and each member eying the oncoming decade with trepidation and suspicion.
Martin Popoff is the author of 85 books on music, including four previous titles on Rush. He has also worked on various documentaries for Banger Films, including the award-winning Rush documentary Beyond the Lighted Stage. Popoff has more record reviews published in books than anybody in the history of music writing. He lives in Toronto, Ontario.