Wall of Honor: A Celebration of Fayetteville's Everyday Heroes (Paperback) 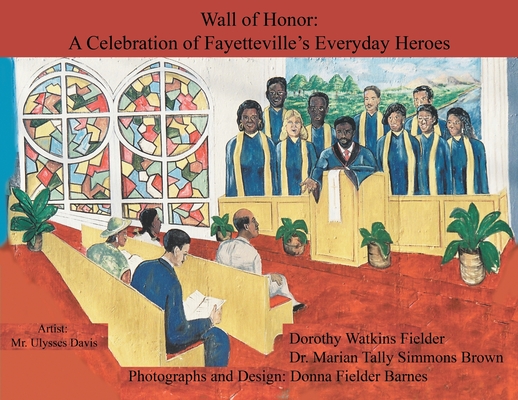 Wall of Honor: A Celebration of Fayetteville's Everyday Heroes (Paperback)

This nonfiction book for middle-grade readers shows artistic images about the history of an African American neighborhood in Fayetteville, North Carolina- its people, values, traditions and culture. All segments of the College Heights population (schools, university and community) came together to paint a one block long mural called the 'Wall of Honor'.

High school social worker Dorothy Fielder conceived the project for her at risk students who enjoyed trips. Rather than painting nationally known figures, they chose to honor the local heroes- people in their own neighborhood who lived good lives worth emulating. The artwork has been updated and maintained by the community for over 25 years.

The mural describes scenes of life and culture in Africa, the voyage through the middle passage, and enslavement in America. It shows people who organized to resist injustices of the Jim Crow era, and people in a multitude of professions who worked to sustain families, churches, and organizations. The mural profiles people who participated in building a strong stable community through education, hard work, faith, and unity.

Along with 20 full page images of the wall, this book provides the literary expression of the philosophy behind each wall panel. It tells the story of everyday heroes and heroines who may not be stars, but who plod through hard times -facing struggles, and overcoming challenges- for little recognition beyond their small circle.

This neighborhood mural project is a public reminder for the people who view it that you don't have to be a figure on the national stage to make a difference. We all have an important role to play in our own families, churches, organizations, and communities: to combine our forces to do positive things in the world. This book is the first of a series. Future installments are intended to expand on the biographies of the people depicted on the Wall of Honor, and add to it, with family members and neighbors submitting the stories of other people who have contributed to building a strong community.