The National Hymn (God of Our Fathers): for Trombone Quartet (Paperback) 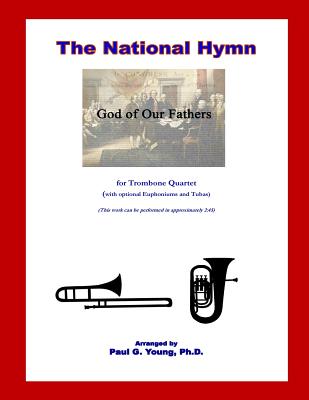 The National Hymn (God of Our Fathers): for Trombone Quartet (Paperback)


Estimated arrival to store from West coast warehouse: 2 days. From East coast warehouse: 8 to 10 days.
This book is non-returnable. We will confirm your order with you before placing to be sure you acknowledge and accept.
This arrangement of the National Hymn, also known as God of Our Fathers, will be a crowd-pleaser when programmed for an advanced high school trombone quartet, or a trombone or low brass ensemble. Scored in the key of E-flat with a modulation to F major, the range is from pedal-tone B-flat (bass trombone) to high G (trombone 1). Why not feature the entire low brass section of your performing group? Euphoniums (baritone horns reading bass clef) and tubas can easily be added and doubled on selected parts. The National Hymn's origins can be traced back to 1876 when the United States was celebrating the 100th anniversary of the signing of the Declaration of Independence. Daniel C. Roberts (1841-1907) wrote the text for a hymn tune (known as the Russian Hymn) to be used during a small patriotic celebration in Vermont. The lyrics asked God to continue to guide and protect the people of the nation as He had done in the past. More than a decade later, using Roberts' lyrics, George W. Warren composed a hymn melody beginning with a trumpet fanfare, which helped set the work's martial tone and unmistakable feelings of patriotism. In 1892, Warren's hymn was selected for use in a celebration of the United States Constitution, which had become ratified more than 100 years earlier in 1788. He called this new hymn The National Hymn. It is also known as God of Our Fathers or God of the Ages (#698 in the United Methodist Hymnal).
Paul G. Young, Ph.D., is a graduate of the Ohio University School of Music (Athens, OH). He has worked more than 45 years as a music teacher and school administrator (high school band director, private instructor, college lecturer, elementary principal, and more). He is a member of the Ohio Music Education Association (OMEA) and the National Association for Music Education (NAfME) and a frequent clinician at state and national conferences for music teachers, principals, and afterschool professionals. He is the author of Enhancing the Professional Practice of Music Teachers: 101 Tips that Principals Want Music Teachers to Know and Do (Rowman & Littlefield Education).