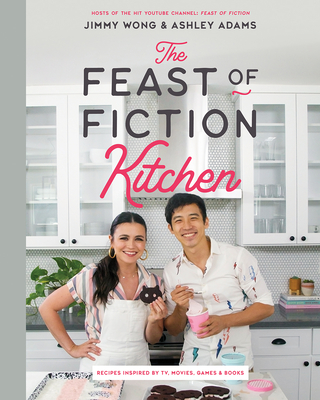 Fans of Feast of Fiction have been clamoring for a cookbook since the channel debuted in 2011. Now it’s here! Just as they do on the small screen, hosts Jimmy Wong and Ashley Adams whip up their real-life interpretation of fictional dishes to pay homage in a genuine, geeky, and lively way. Jimmy brings a wealth of gamer and nerd cred to the table, and baker extraordinaire Ashley provides the culinary wisdom. The quirky duo offer an array of creative and simple recipes, featuring dishes inspired by favorites such as Star Trek and Adventure Time, as well as Butterbeer (Harry Potter), A Hobbit’s Second Breakfast, Mini “Dehydrated” Pizzas (Back to the Future), Sansa’s Lemon Cakes (Game of Thrones), and dishes from the niches of gaming, comics, and animation such as Fire Flakes (Avatar), Poke Puffs (Pokemon), and Heart Potions (The Legend of Zelda).

With 55 unique and awesome dishes, this long-awaited cookbook will help inspire a pop culture dinner party, a fun night at home with family and friends, or an evening on the couch thinking about what you could be cooking!

Jimmy Wong is a bona fide geek, host, and content creator who has been making viral videos since 2010. As an actor, songwriter, and veteran of the internet, his videos have been viewed more than 140 million times. He is the creator of Feast of Fiction and stars in Mulan, a live-action remake of the Disney classic, premiering March 2020. He lives in Los Angeles, California.

Ashley Adams is a self-taught baker, DIY extraordinaire, and cooking enthusiast. In 2011, she kicked off her online career as the cohost of Feast of Fiction. Ashley has worked with major brands such as Nestlé Toll House, Kraft, Pepsi, Walmart, Food Network, Conagra, and Tastemade. She lives in Los Angeles, California.