Rise Up with a Song: The True Story of Ethel Smyth, Suffragette Composer (Hardcover) 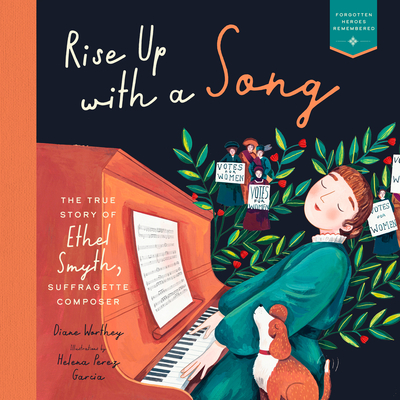 Rise Up with a Song: The True Story of Ethel Smyth, Suffragette Composer (Hardcover)

The first-ever picture book about Ethel Smyth, the world-famous composer and suffragette

"Brave women in history are examples that help us to be brave in the present. Learning about Ethel Smyth will be life-changing right now." --Gloria Steinem

? "A stirring tribute to a free-spirited composer who rode roughshod over her time's constraints on women....A rare nod to a now (but undeservedly) obscure artist, eloquent and inspirational."--Kirkus Reviews, starred review

In 1867 England, a girl learned to be proper and speak when spoken to. But one girl marched to a different beat. Ethel Smyth climbed fences, explored graveyards, and yearned to become a famous composer at a time when only men could publish their music. But become a composer she did, first signing her music as E. Smyth so people couldn't guess her gender, then eventually writing openly as a woman (but still sometimes not getting paid ). Ethel had had enough. She joined the suffragette movement, marching in the streets and fighting for the right to vote. She even composed the famous March of the Women battle cry--and directed it from her cell window with a toothbrush when she was put into prison.

In superb text and stunning illustrations, Rise Up With a Song tells this remarkable story of Ethel Smyth, the woman who refused to stay down and who used her music to change the fate of women around the world. Backmatter includes a brief bio of Ethel's musical life, a list of famous works, and even a fascimile of her famous March of the Women. An essential addition to musical and feminist libraries everywhere

"As I discovered when I first encountered her superb compositions, Ethel Smyth's music speaks for itself. But reading about her remarkable life story can also compel us to do more - to be more bold, and to fight for what we believe in. Told here in a wonderful way by Diane Worthey, this book will inspire people of all ages and genders." --James Blachly, Music Director, Experiential Orchestra