The Cost of Loyalty: Dishonesty, Hubris, and Failure in the U.S. Military (Hardcover) 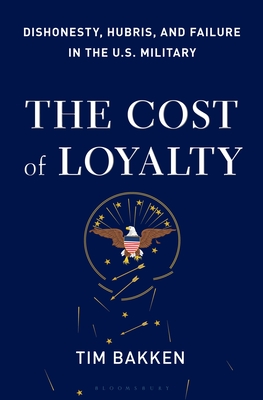 The Cost of Loyalty: Dishonesty, Hubris, and Failure in the U.S. Military (Hardcover)

A Kirkus Reviews Best Book of 2020

A courageous and damning look at the destruction wrought by the arrogance, incompetence, and duplicity prevalent in the U.S. military—from the inside perspective of a West Point professor of law.

Veneration for the military is a deeply embedded but fatal flaw in America’s collective identity. In twenty years at West Point, whistleblower Tim Bakken has come to understand how unquestioned faith isolates the U.S. armed forces from civil society and leads to catastrophe. Pervaded by chronic deceit, the military’s insular culture elevates blind loyalty above all other values. The consequences are undeniably grim: failure in every war since World War II, millions of lives lost around the globe, and trillions of dollars wasted.

Bakken makes the case that the culture he has observed at West Point influences whether America starts wars and how it prosecutes them. Despite fabricated admissions data, rampant cheating, epidemics of sexual assault, archaic curriculums, and shoddy teaching, the military academies produce officers who maintain their privileges at any cost to the nation. Any dissenter is crushed. Bakken revisits all the major wars the United States has fought, from Korea to the current debacles in the Middle East, to show how the military culture produces one failure after another.

The Cost of Loyalty is a powerful, multifaceted revelation about the United States and its singular source of pride. One of the few federal employees ever to win a whistleblowing case against the U.S. military, Bakken, in this brave, timely, and urgently necessary book, and at great personal risk, helps us understand why America loses wars.

Tim Bakken is the first civilian promoted to professor of law in West Point's history. He became a federal whistleblower after reporting corruption at West Point and, after the Army retaliated against him, became one of the few federal employees to win a retaliation case against the U.S. military. A former homicide prosecutor in Brooklyn, Bakken received law degrees from Columbia University and the University of Wisconsin and is still teaching at West Point. He lives in New York City.

“Brave . . . [The Cost of Loyalty] should land like a grenade. Unlike the myriad critiques of the military that wash over the institution from outside the Blob, this one is written by a professor with 20 years on the inside. He knows the instructors, the culture, the admissions process, the scandals, the cover-ups, and how its legendary “warrior-scholars” have performed after graduation and on the battlefield . . . if the real sausage is made at the military academies, then Bakken has invited us in on some of the more distasteful elements going right on under our noses.” - The American Conservative

"[The Cost of Loyalty] reads like an Auditor General’s Report – endless examples of incompetence, bias, total disregard for the constitution, wasted money and unindicted criminal activity. Its actions lead to deaths in the millions. Its extravagance costs taxpayers trillions . . . [Tim Bakken proves] the military simply disregards the civilian world and operates separately, under its own system, totally incompatible with American values and laws." - San Francisco Review of Books

"Strikes hard at the military establishment. The author’s condemnation of the idea of loyalty above all else is not without stark examples. The author has been a target of reprisals for espousing contrary views, yet a steely resolve led him to fight. The power of persuasion is present throughout this work." - Portland Book Review

"A provocative, disturbing argument that a democracy is in trouble when it venerates the military unconditionally." - starred review, Kirkus Reviews

"[The Cost of Loyalty is] a blistering, top-to-bottom critique of America’s armed forces . . . Bakken’s insider perspective, litany of shocking examples, and evidence-based approach combine to paint a grim picture of failures by U.S. political and military leaders and their implications for the future . . . this essential and disturbing account illuminates the state of the problem." - Publishers Weekly

"Hard-hitting and timely . . . Bakken offers withering commentary on the indoctrination that begins in the academies and results in a perverse patriotism that pushes military leaders into an "us vs. them" mentality. This tendency, according to Bakken, combined with resistance to civilian oversight, has cost America countless lives and has resulted in the failure of every major military engagement since the end of the World War II." - Library Journal

"A scalding account of the self-rewarding ethos that permeates (and weakens) today's military leadership from West Point to the Pentagon, Tim Bakken's The Cost of Loyalty should be required reading for all members of Congress." - Lloyd C. Gardener, author of THE WAR ON LEAKERS NATIONAL SECURITY AND AMERICAN DEMOCRACY, FROM EUGENE V. DEBS TO EDWARD SNOWDEN

"The Cost of Loyalty articulates a glaring and unflattering dilemma within the armed forces, where loyalty is often the principal value chosen over the military services’ common core values. Leaders of character must continue to train and educate the force, and this book is a must read for every military institution—if not all Congressional members and staff." - Major General Antonio Taguba, U.S. Army

"This is a book that needs to be read by all Americans. I do not say that often, in fact, I believe this is the first time. Tim Bakken makes the case for a re-adjustment in the way we as American citizens consider our military and how we determine the issues of war and peace . . . [an] indictment that has long been overdue." - Edward G. White, Vietnam Veterans Against the War

"Traces a path of corruption, barbarism, violence, and unaccountability that makes its way from the United States’ military academies . . . to the top ranks of the U.S. military and U.S. governmental policy, and from there into a broader U.S. culture that, in turn, supports the subculture of the military and its leaders . . . honest and accurate." - American Herald Tribune

"[The Cost of Loyalty] speaks to me at multiple levels simultaneously . . . I found myself unconsciously squirming in my chair while examining [Bakken’s] text in detail. I know and understand this discomfort from personal hard-won experience. It happens when reading an essential truth that I wish was false." - Robert Bruce Adolph, former United Nations Chief Security Adviser and U.S. Army Special Forces lieutenant colonel

The Cost of Loyalty is compelling and the subject matter is too important to ignore." - The European Journal of Military Studies

"The most powerful, realistic, and important book I’ve read in thirty years. I cannot recommend it strongly enough." - John Ketwig, Vietnam Veterans Against the War