Fate of the Free Lands (Empress of the Endless Sea) (Paperback) 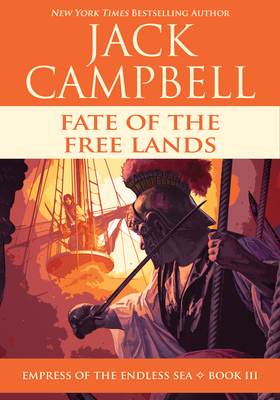 Fate of the Free Lands (Empress of the Endless Sea) (Paperback)


Estimated arrival to store from West coast warehouse: 2 days. From East coast warehouse: 8 to 10 days.
This book is non-returnable. We will confirm your order with you before placing to be sure you acknowledge and accept.
Trapped inside the Empire, Captain Jules of Landfall has to use every deadly trick and strategy she knows to avoid recapture by the Emperor’s legions, and stay alive despite every attempt the Mages make to kill her. The only chance to get away may require walking back into the trap she barely escaped the first time. But even her freedom won’t be enough. The prophecy that consumes Jules’s life demands she has an heir to carry on her line. Yet how can she satisfy that while being hunted everywhere? And what might the prophecy cause to happen if she doesn’t have a child?

Battling wind, waves, implacable Mage assassins, and Imperial ships, Jules is forced to turn to an unlikely ally—the hated Mechanics. She must gather men, women, and ships from all of the new settlements to face the Imperial legionaries and galleys. For only Jules can lead the free people of the west in the final battle that could be their salvation—or the destruction of all that she’s fought for.
"Jack Campbell" is the pseudonym for John G. Hemry, a retired Naval officer who graduated from the U.S. Naval Academy in Annapolis before serving with the surface fleet and in a variety of other assignments. He is the author of The Lost Fleet military science fiction series, as well as the Beyond the Frontier continuation of The Lost Fleet, spin-off series The Lost Stars, the Stark's War series, and the Paul Sinclair/"JAG in space" series. His short fiction appears frequently in Analog magazine, and many have been collected in the three Jack Campbell ebook anthologies, Ad Astra, Borrowed Time, and Swords and Saddles. The Pillars of Reality is his first epic fantasy series. He lives with his indomitable wife and three children in Maryland.