The Boy in the Orange Cape (Hardcover) 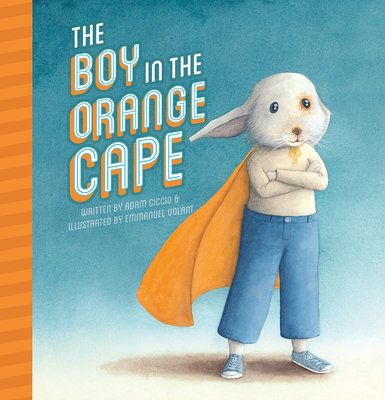 The Boy in the Orange Cape (Hardcover)

A warmhearted conversation starter of a book. - Kirkus Reviews

"Encouraging forgiveness and celebrating strength in numbers, this cheerful book's illustrations include surreal touches and muted colors, easing the audience into their messages." - Foreword Reviews

Every day Corey wears an orange cape. Even at bedtime. Even at school. The other children tease him, but Corey doesn't mind. After all, he wears his cape for a reason . . . Billy would rip the cape off every day. And every day, Corey would show up with a new cape. Then, one of the boys found the very noble reason why Corey was wearing a cape.

An inspiring book about courage, caring, and the hero inside everyone. For superheroes ages 5 and up.

Adam Ciccio was born in Boston, Massachusetts. He was raised in Savannah, Georgia, and attended high school at St. Andrew's School on Wilmington Island, GA. Ciccio graduated with a Bachelor of Arts in English from the University of New Hampshire (Durham, NH) in 2006 and with a Master of Science in Psychological Counseling at Salem State University (Salem, MA) in 2012. He owns an outpatient mental health practice for children and adults in Marblehead, Massachusetts, the same town which he currently resides. Ciccio is the author of several picture books that focus on developmental growth and self-confidence during early childhood. Emmanuel Volant is a French illustrator and writer. His main work area of expertise relates to children's books. He also draws and creates posters, flyers, logos, et cetera. He currently resides in The Hague, The Netherlands