Speaker for the Dead (The Ender Saga #2) (CD-Audio) 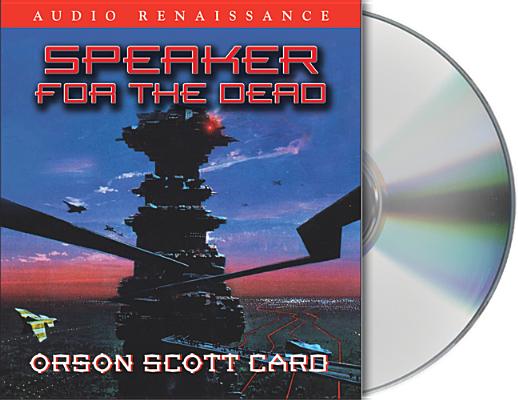 Speaker for the Dead (The Ender Saga #2) (CD-Audio)

The thrilling sequel to Ender's Game and winner of the Hugo and Nebula Awards—this full cast unabridged recording includes an original postscript written and recorded by author Orson Scott Card.

Three thousand years have passed since Ender Wiggin won humanity's war with the Buggers by totally destroying them. Ender remains young, traveling the stars at the speed of relativity, but a hundred years or more might pass on Earth while he experiences a month-long voyage. In three thousand years, Ender's books The Hive Queen and The Hegemon, written under a pseudonym, have become holy writ, while the name of Ender itself has become anathema: he is the Xenocide, the one who killed an entire race of thinking, feeling beings, killed the only other sapient race humankind had found in all the galaxy.

The only ones, that is, until the planet called Lusitania was discovered and colonized. The discovery was seen as a gift to humanity, a chance to redeem the destruction of the Buggers. This time, the Starways Congress vowed, there would be no tragic misunderstanding leading to war. But once again men die, killed by the aliens in a rite no one understands. Ender, now known only as the Speaker for the Dead, comes to Lusitania to speak for those who have died and discovers that in order to tell the truth about them, he must unravel the secrets of Lusitania.

David Birney has read a number of works for Theatreworks, NPR Playhouse and BBC dramatic recordings, including The Diary of Anne Frank, Star Wars, and Julius Caesar. His audiobook credits include narrating several Orson Scott Card books as well as reading for many AudioFile Earphones Award winning titles. Birney is also an award-winning actor and director. He has starred in many television films, among them Love and Betrayal, Long Journey Home, The Deadly Game, High Midnight, and The Champions. His extensive stage credits include starring roles on Broadway and major roles at the American Shakespeare Festival, New York's Lincoln Center Repertory Theatre, the New York Shakespeare Festival, Los Angeles' Mark Taper Forum, Washington, D.C.'s Shakespeare Theatre and numerous regional theatres.

Orson Scott Card is best known for his science fiction novel Ender's Game and its many sequels that expand the Ender Universe into the far future and the near past. Those books are organized into the Ender Quintet, the five books that chronicle the life of Ender Wiggin; the Shadow Series, which follows on the novel Ender's Shadow and are set on Earth; and the Formic Wars series, written with co-author Aaron Johnston, which tells of the terrible first contact between humans and the alien "Buggers." Card has been a working writer since the 1970s. Beginning with dozens of plays and musical comedies produced in the 1960s and 70s, Card's first published fiction appeared in 1977--the short story "Gert Fram" in the July issue of The Ensign, and the novelette version of "Ender's Game" in the August issue of Analog. The novel-length version of Ender's Game, published in 1984 and continuously in print since then, became the basis of the 2013 film, starring Asa Butterfield, Harrison Ford, Ben Kingsley, Hailee Steinfeld, Viola Davis, and Abigail Breslin.

Stefan Rudnicki is an award winning audiobook narrator, director and producer. He was born in Poland and now resides in Studio City, California. He has narrated more than three hundred audiobooks and has participated in over a thousand as a writer, producer, or director. He is a recipient of multiple Audie Awards and AudioFile Earphones Awards as well as a Grammy Award, a Bram Stoker Award, and a Ray Bradbury Award. He received AudioFile’s award for 2008 Best Voice in Science Fiction and Fantasy. Along with a cast of other narrators, Rudnicki has read a number of Orson Scott Card's best-selling science fiction novels. He worked extensively with many other science fiction authors, including David Weber and Ben Bova. In reviewing the twentieth anniversary edition audiobook of Card’s Ender's Game, Publishers Weekly stated, "Rudnicki, with his lulling, sonorous voice, does a fine job articulating Ender's inner struggle between the kind, peaceful boy he wants to be and the savage, violent actions he is frequently forced to take." Rudnicki is also a stage actor and director.

“The most powerful work Card has produced. Speaker not only completes Ender's Game, it transcends it.” —Fantasy Review

“A well-presented audio novel, this is one to enjoy with your feet up and a cap of tea or coffee. Don't have any other distractions. The results will be rewarding.” —Stephen Hunt's SFCrowsNest.com