The Man with the Violin (Paperback) 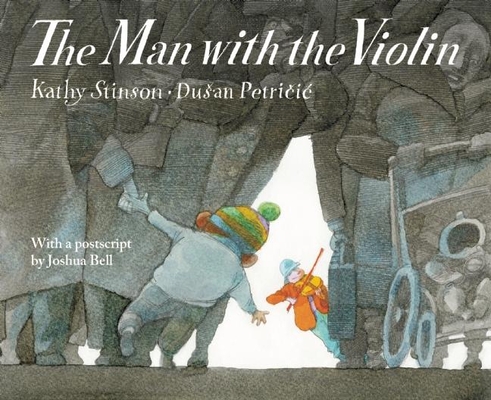 The Man with the Violin (Paperback)


Estimated arrival to store from West coast warehouse: 2 days. From East coast warehouse: 8 to 10 days.
Winner of the 2014 TD Children's Literature Award--now in paperback Dylan is someone who notices things. His mom is someone who doesn't. So try as he might, Dylan can't get his mom to listen to the man playing the violin in the subway station. But Dylan is swept away by the beautiful music that fills the air as crowds of oblivious people hurry past. This gorgeous picture book is based on the true story of Joshua Bell, a world-renowned classical violinist who famously took his instrument down into the Washington D.C. subway for a free concert. More than a thousand commuters rushed by him, but only seven stopped to listen, most of them children. Kathy Stinson's vividly imagined text combined with Dusan Petricic's illustrations that pulse with energy and movement, expertly demonstrate the transformative power of music. With an afterword by Joshua Bell.
Kathy Stinson is the author of over 25 books for young people, including the beloved, bestselling Red Is Best. She lives near Guelph, Ontario. Dusan Petricic is an editorial cartoonist as well as the award-winning illustrator of such children's books as Mattland, Bone Button Borscht, and Mr. Zinger's Hat. His latest book for Annick is Snap! He lives in Zemun, Serbia.