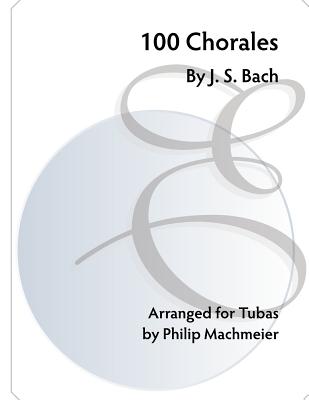 
Estimated arrival to store from West coast warehouse: 2 days. From East coast warehouse: 8 to 10 days.
This book is non-returnable. We will confirm your order with you before placing to be sure you acknowledge and accept.
100 Chorales by J.S. Bach are arranged for tuba quartet by Philip Machmeier. These beautiful chorales are fun to play. Intonation, phrasing, breath control and tonal development will be enhanced by playing these works.
Philip Machmeier grew up playing the tuba in the public schools of Minnesota before receiving a music scholarship to Bemidji State College. While attending BSC he was offered the opportunity to study with tuba legend Tommy Johnson at the University of Southern California. He transferred to USC and later graduated in 1977 with a degree in instrumental music education. During his time at USC-in addition to his studies with Tommy Johnson-he performed in the Wind Ensemble, the USC Symphony Orchestra, and the USC Tuba Ensemble. After graduation, he taught instrumental music (both winds and strings) for fourth, fifth and sixth grades in the Irvine Unified School District in California, as well as doing additional work at the high school level. Since moving to the Eau Claire, Wisconsin area, he has given special presentations for students of the University of Wisconsin - Eau Claire School of Nursing, and has presented a master class for the UWEC tuba and euphonium studio. He continues to be an active arranger of instrumental and vocal music.