One Person, No Vote (YA edition): How Not All Voters Are Treated Equally (Paperback) 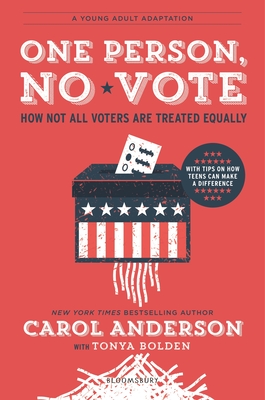 One Person, No Vote (YA edition): How Not All Voters Are Treated Equally (Paperback)

“Carol Anderson’s White Rage was a revelation, not so much because it explained things we didn’t already know, but by framing the narrative as she did, it became impossible to view the history of backlash against civil rights progress as anything but systematic. To an even greater extent, to read One Person, No Vote is to understand more clearly than ever how the powerful in this country are relentlessly fighting to deprive our most vulnerable citizens of their most fundamental right.”
— Frank Reiss, A Cappella Books, Atlanta, GA

This young adult adaptation brings to light the shocking truth about how not every voter is treated equally. After the election of Barack Obama, a rollback of voting rights occurred, punctuated by a 2013 Supreme Court decision that undid the Voting Rights Act of 1965. Known as the Shelby ruling, this decision allowed districts with a history of racial discrimination to change voting requirements without approval from the Department of Justice. This book follows the stunning aftermath of that ruling and explains how voter suppression works, from photo ID requirements to gerrymandering to poll closures. It also explores the resistance: the organizing, activism, and court battles to restore the basic right to vote to all Americans.

Complete with a discussion guide, photographs, and information about getting involved with elections in teens' own community, this is an essential explanation of the history of voting rights-and a call to action for a better future. As the nation gears up for the 2020 presidential election season, now is the time for teens to understand the past and work for change.

Carol Anderson is the Charles Howard Candler Professor and Chair of African American Studies at Emory University. She is the author of One Person, No Vote, longlisted for the National Book Award and a finalist for the PEN/John Kenneth Galbraith Award; White Rage, a New York Times bestseller and winner of the National Book Critics Circle Award; Bourgeois Radicals; and Eyes off the Prize. She was named a Guggenheim Fellow for Constitutional Studies and is a member of the American Academy of Arts and Sciences. She lives in Atlanta, Georgia.

“. . . [D]ocuments centuries of techniques designed to limit progress in the black community. Although some of the material may be upsetting, this is a book that should absolutely be included in the curriculum.” —School Library Connection, starred review