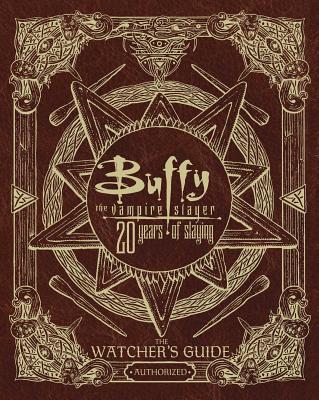 
Estimated arrival to store from West coast warehouse: 2 days. From East coast warehouse: 8 to 10 days.
A special hardcover collector’s edition of the authorized Buffy the Vampire Slayer Watcher’s Guides, now with updated content from the cast and crew!

As long as there have been vampires, there has been the Slayer. One girl in all the world to find them where they gather and to stop the spread of their evil and the swell of their numbers.

Just in time for the show’s twentieth anniversary, the Buffy the Vampire Slayer Watcher’s Guides have been compiled into one hardcover collector’s edition for the first time! Inside, you’ll find all the best content from Volumes 1–3 of the original Watcher’s Guides, as well as exclusive new content, including never-before-seen interviews with the cast and crew.
Christopher Golden is the New York Times bestselling author of novels for adults and younger readers. In addition to the Magic Zero quartet, his YA fiction includes Poison Ink and both the Prowlers series and the Body of Evidence series of teen thrillers, several of which have appeared on the YALSA Best Books for Young Readers list. His current work-in-progress is Cemetery Girl, a graphic novel trilogy collaboration with Charlaine Harris. He has cowritten three illustrated novels with Mike Mignola, the first of which, Baltimore, or The Steadfast Tin Soldier and the Vampire, was the launching pad for the Eisner-nominated, New York Times bestselling comic book series Baltimore. As an editor, he has worked on the short story anthologies The New Dead, The Monster’s Corner, and 21st Century Dead, among others, and has also written and cowritten video games, screenplays, and a network television pilot. His original novels have been published in more than fourteen languages in countries around the world.