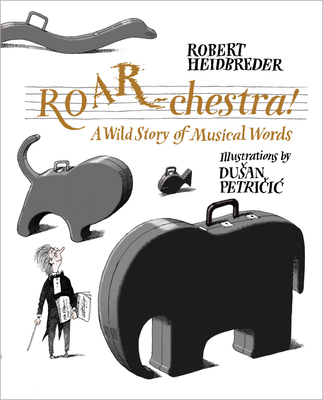 
Estimated arrival to store from West coast warehouse: 2 days. From East coast warehouse: 8 to 10 days.
An animated conductor and his orchestra of animals let the words move them in this engaging exploration of some beautiful and inspiring musical terms.

In this simple introduction to seven musical terms, Robert Heidbreder's rhythmic poetry is paired with Duýan Petričić's exuberant illustrations to perfectly convey the terms' meanings. Each term is first featured on a spread beside an image of a conductor animatedly leading his (unseen) orchestra in alignment with the term. Turn the page, and we find a short line of text that provides a succinct physical definition of the term, along with expressive art showcasing the animal orchestra using movement to interpret the description. For glissando, we find: “Gently gliding, slipping, sliding,” with an image of animals flowing across the pages as if rolling on a wave. For fortissimo, the text reads, “Loudly crashing --- stomping, stamping,” while the animals are shown with their heads thrown back and their mouths wide open, roaring for all the world to hear. It's a performance so enticing, readers won't be able to resist joining in!

This unique picture book provides an engaging and entertaining way for children to understand and remember the meanings of these common musical terms (all Italian and great fun to pronounce). But it is also sure to inspire readers to get up and move, following and mimicking the animals, or, perhaps, playing the conductor. An excellent choice for any unit on music, this book offers an accessible and effective way to learn musical terms as well as a fun opportunity to play with music.
Robert Heidbreder was born in Illinois but now lives in British Columbia. He has enchanted children with his joyful poems and rhymes for more than two decades. A former elementary school teacher (and winner of the Prime Minister's Award for Teaching Excellence), he believes that children's love of silly and absurd combinations of words makes them natural poets. His books include Eenie Meenie Manitoba, Don't Eat Spiders, I Wished for a Unicorn, Drumheller Dinosaur Dance, Python Play, See Saw Saskatchewan, Crocodiles Say, A Sea-Wishing Day, Lickety-Split, Crocodiles Play, Shake-Awakes, Noisy Poems for a Busy Day, Black and Bittern Was Night and Song for a Summer Night.

... an enticing, informative, and understandable introduction to music for young readers.—CM Magazine

An accessible and inviting look at aspects of classical music that will have children dancing.—School Library Journal