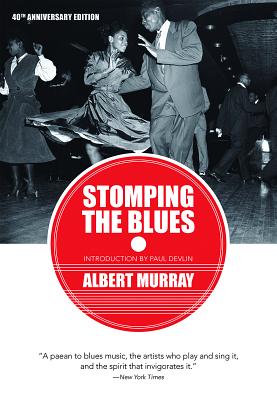 In this classic work of American music writing, renowned critic Albert Murray argues beautifully and authoritatively that “the blues as such are synonymous with low spirits. Not only is its express purpose to make people feel good, which is to say in high spirits, but in the process of doing so it is actually expected to generate a disposition that is both elegantly playful and heroic in its nonchalance.”

In Stomping the Blues Murray explores its history, influences, development, and meaning as only he can. More than two hundred vintage photographs capture the ambiance Murray evokes in lyrical prose. Only the sounds are missing from this lyrical, sensual tribute to the blues.

Albert Murray (1916-2013) wrote thirteen books, including influential works such as The Omni-Americans and South to a Very Old Place. Minnesota has published Murray Talks Music: Albert Murray and Jazz and Blues, a collection of his previously uncollected/unpublished music writings and interviews, Rifftide, an autobiography of drummer Jo Jones as told to Murray, and republished Murray's and Count Basie's Good Morning Blues: The Autobiography of Count Basie. Murray's non-fiction is available from the Library of America and his fiction and poetry will be as well in early 2018. He cofounded Jazz at Lincoln Center in 1987.


Paul Devlin is the editor of Murray Talks Music: Albert Murray and Jazz and Blues, and Rifftide: The Life and Opinions of Papa Jo Jones, as told to Albert Murray, a finalist for the Jazz Journalists Association's book award. He is the co-editor, with Henry Louis Gates, Jr., of the Library of America's volumes of Murray's work. He is Assistant Professor of English at the U.S. Merchant Marine Academy and is the book review editor of African American Review.

"Murray is possessed of the poet’s language, the novelist’s sensibility, the essayist’s clarity, the jazzman’s imagination, the gospel singer’s depth of feeling."—The New Yorker

"A flamboyant, insightful examination and evocation of the sources, styles, and mythologies of blues music."—Newsweek

"One fine lyrical history of the music. Murray demonstrates the central role of blues/jazz in American culture, telling us about the nature of our past, present and future: which of course is exactly what the blues is."—San Francisco Review of Books