The Science of Science Fiction: The Influence of Film and Fiction on the Science and Culture of Our Times (Paperback) 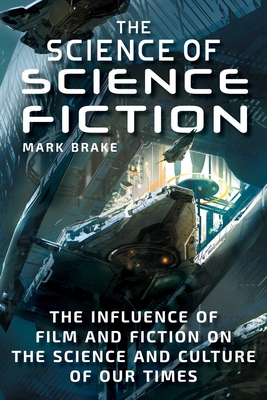 The Science of Science Fiction: The Influence of Film and Fiction on the Science and Culture of Our Times (Paperback)


Ask us a question if anything isn't clear. Thanks!
Let Mark Brake open your eyes to how science fiction helped us dream of things to come and building the future we inhabit—from Star Trek to The Martian, from Back to the Future to Guardians of the Galaxy from 2001: A Space Odyssey to The Avengers.

Media headlines declare this the age of automation. The TV talks about the coming revolution of the robot, tweets tell tales of jets that will ferry travelers to the edge of space, and social media reports that the first human to live for a thousand years has already been born. The science we do, the movies we watch, and the culture we consume is the stuff of fiction that became fact, the future imagined in our past—the future we now inhabit.

“This book is the story of how science fiction shaped our world. No longer a subculture, science fiction has moved into the mainstream with the advent of the information age it helped realize. Explore how science fiction has driven science. This book will open your eyes to the way science fiction helped us dream of things to come, forced us to uncover the nature and limits of our own reality, and helped us build the science-fiction-driven world we live in today.”
Mark Brake developed the world’s first science and science fiction degree in 1999. He also launched the world’s first astrobiology degree in 2005. He’s communicated science through film, television, print, and radio on five continents, including for NASA, Seattle’s Science Fiction Museum, the BBC, the Royal Institution, and Sky Movies. He was one of the founding members of NASA’s Astrobiology Institute Science Communication Group. He has written more than a dozen books, including Alien Life Imagined for Cambridge University Press in 2012. Mark also tours Europe with Science of Doctor Who, Science of Star Wars, and Science of Superheroes road shows.
"Insightful, fascinating, and an easy read." —Booklist Online

"It is rare to find someone of Mark's universal talents in science." —Roy Davies, BAFTA-nominated editor of BBC's Timewatch

"Entertaining and insightful. A joy for fans of both science and fiction." —Gareth L. Powell, award-winning author of Ack-Ack Macaque

"A brilliant insight into the influence of Science Fiction on our world, culture, and imaginations. Bringing together more than four centuries of SF, Mark Brake reveals some of the fictional seeds that have developed into real life discoveries." —Jon Chase, award-winning science communicator and co-author of The Science of Star Wars