Cuba (Winner of the Pulitzer Prize): An American History (Hardcover) 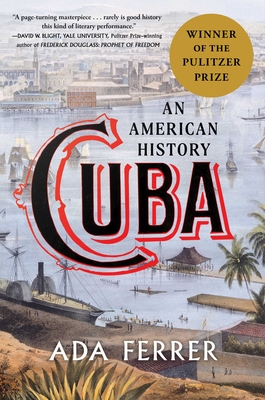 Cuba (Winner of the Pulitzer Prize): An American History (Hardcover)

“Full of…lively insights and lucid prose” (The Wall Street Journal) an epic, sweeping history of Cuba and its complex ties to the United States—from before the arrival of Columbus to the present day—written by one of the world’s leading historians of Cuba.

In 1961, at the height of the Cold War, the United States severed diplomatic relations with Cuba, where a momentous revolution had taken power three years earlier. For more than half a century, the stand-off continued—through the tenure of ten American presidents and the fifty-year rule of Fidel Castro. His death in 2016, and the retirement of his brother and successor Raúl Castro in 2021, have spurred questions about the country’s future. Meanwhile, politics in Washington—Barack Obama’s opening to the island, Donald Trump’s reversal of that policy, and the election of Joe Biden—have made the relationship between the two nations a subject of debate once more.

Now, award-winning historian Ada Ferrer delivers an “important” (The Guardian) and moving chronicle that demands a new reckoning with both the island’s past and its relationship with the United States. Spanning more than five centuries, Cuba: An American History provides us with a front-row seat as we witness the evolution of the modern nation, with its dramatic record of conquest and colonization, of slavery and freedom, of independence and revolutions made and unmade.

Along the way, Ferrer explores the sometimes surprising, often troubled intimacy between the two countries, documenting not only the influence of the United States on Cuba but also the many ways the island has been a recurring presence in US affairs. This is a story that will give Americans unexpected insights into the history of their own nation and, in so doing, help them imagine a new relationship with Cuba; “readers will close [this] fascinating book with a sense of hope” (The Economist).

Filled with rousing stories and characters, and drawing on more than thirty years of research in Cuba, Spain, and the United States—as well as the author’s own extensive travel to the island over the same period—this is a stunning and monumental account like no other.
Ada Ferrer is Julius Silver Professor of History and Latin American and Caribbean Studies at New York University, where she has taught since 1995. She is the author of Insurgent Cuba: Race, Nation, and Revolution, 1868–1898, winner of the Berkshire Book Prize for the best first book by a woman in any field of history, and Freedom’s Mirror: Cuba and Haiti in the Age of Revolution, which won the Frederick Douglass Book Prize from the Gilder Lehrman Center at Yale University as well as multiple prizes from the American Historical Association. Born in Cuba and raised in the United States, she has been traveling to and conducting research on the island since 1990.

“The heroes of Ada Ferrer’s narrative are the island’s nationalists and reformers. . . . [She] reveals a relationship that is deeper and more troubled than it may appear. . . . Yet readers will close Ms. Ferrer’s fascinating book with a sense of hope. . . . moving.” —The Economist

“Cuba focuses on the equivocal relationship of the two countries, and presents it convincingly as symbiotic. . . . exemplary . . . [full of] lively insights and lucid prose. . . . By being equally severe with Cuban leaders and US leaders, Ms. Ferrer achieves an honorable objective: pleasing nobody by being just.” —Wall Street Journal

“Important. . . . rather than putting geopolitics or 'great men' at the heart of the book, Ferrer’s focus is on the Cuban people, the descendants of whom are calling for libertad." —The Guardian

"Ferrer’s narrative history of Cuba’s past 500 years is epic, authoritative, and deeply insightful. . . . [an] essential book. . . . Cuba is broad and expansive and inclusive, telling a hemisphere-wide story of colonialism, enslavement, and entangled empires, nations, and peoples—the legacies of which are still with us." —Geraldo Cadava, Public Books

“This monumental new book represents another formidable piece of original scholarship. It is written, moreover, in an admirably paced narrative style, which, one suspects, will earn it pride of place among the published histories of Cuba.” —Jon Lee Anderson, Foreign Affairs

"An encompassing look back at Cuba, from before the arrival of Columbus to the present day. . . . a moving chronicle of the relationship between the United States and Cuba and what that’s meant for both sides." —Forbes

A fluid, consistently informative history of the long, inextricable link between Cuba and the US, well rendered by a veteran Cuban American historian. . . . Ferrer is an endlessly knowledgeable guide. . . . She is especially good in delineating how a distinct Cuban identity was forged over the centuries. A wonderfully nuanced history of the island nation and its often troubled dealings with its gigantic and voracious neighbor." —Kirkus (starred review)

“Ada Ferrer’s astonishing Cuba succeeds brilliantly with an original approach, written in two voices, folded together seamlessly—one personal, from the depths of family transplantation, and the other a historian’s lyrical narrative. She captures the epic sweep of the island’s story of slavery, massive sugar production, colonialism, and revolution. But she also shows how Cuba and the United States have so long been joined at the hip in shared culture, political crises, and tragedy for the famous and the ordinary. Ferrer’s own ‘heavy inheritance’ is North America’s as well. Above all, Ferrer has achieved a page-turning masterpiece of her craft; rarely is good history this kind of literary performance.” —David W. Blight, Yale University, author of the Pulitzer Prize-winning Frederick Douglass: Prophet of Freedom

“A riveting, nuanced, and insightful narrative told through a multitude of personalities—from the well-known to those whose names have been lost to history. Here is the saga of Cuba presented in all the complexity it deserves: an American story that is inseparable from that of the United States. This clear-eyed chronicle will forever change your perspective on the historic relationship between the two countries and upend much of the history you thought you knew. Ada Ferrer is a gift, a scholar with the subtle prose of a novelist and the heart to chronicle a history that is both personal and epic. Cuba is an absolutely essential read.” —Ana Menéndez, Florida International University and author of In Cuba I Was a German Shepherd

“Revolutions breed history wars. The role of such forces as—colonialism and capitalism, nationalism and imperialism, slavery, race, and socialism, for example—in the shaping of the Cuban past has long been contested terrain. Traversing it demands sober judgement and a steady hand. Fortunately for her readers, Ada Ferrer possesses both in abundance. Hers is a balanced, revelatory, and thoroughly enjoyable exploration of the complex history of this endlessly fascinating country and its relationship with its powerful neighbor. This elegantly written book is as much the history of a country that, for far too many Americans, remains exotic and enigmatic, as it is a surprisingly revealing history of the United States itself, viewed through a lens ninety miles away.” —Henry Louis Gates, Jr., Harvard University

“Ada Ferrer’s Cuba is a remarkable work of history. Covering more than five centuries and much of the Atlantic world, Cuba is also deeply thoughtful and highly personal in a way that truly enriches it. Imaginatively conceived and beautifully written, Cuba tells complex human stories in riveting ways and challenges our understanding of an island whose history has shaped—and will continue to shape—the Americas. Cuba is An American History in the fullest sense.” —Steven Hahn, Pulitzer Prize–winning author of A Nation Under Our Feet: Black Political Struggles in the Rural South from Slavery to the Great Migration