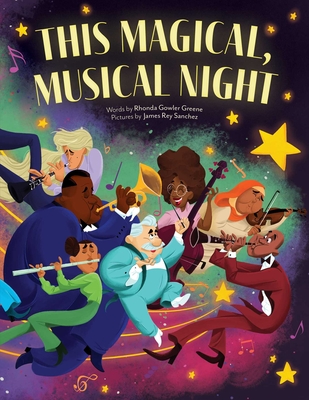 
Estimated arrival to store from West coast warehouse: 2 days. From East coast warehouse: 8 to 10 days.
"A symphony soars in rhyming couplets.There are many other introductions-to-the-orchestra titles out there, but few have such charm. Pleasing to the eye and ear." -Kirkus Reviews, STARRED REVIEW

Music! Music! Oh, how grand! A language we all understand.
Get swept away by the musical performance of a lifetime as, one by one, each instrument of the symphony orchestra shows off their skills!

Follow along as the symphony orchestra's various instruments are introduced. From violin to trumpet, flute to trombone, each plays its part, contributing to a grand and mystifying performance. These magical instruments will transport you in a way only music can. Soar with the strings, float away with the woodwinds, and play in a percussion thunderstorm! Music can take us anywhere, so celebrate and learn about all the instruments of the orchestra and the music that unites us.
Rhonda Gowler Greene has written over twenty-five children's books. Her books have received several honors, including the International Literacy Assocation's Children's Choice Book and the Children's Book Council's Showcase Book. A former elementary learning disabilities teacher, Rhonda now resides with her husband in southeast Michigan. Learn more at rhondagowlergreene.com

James Rey Sanchez' love for art came from countless hours of reading comics, playing video games, and 90's Saturday morning cartoons. After graduating from the Academy of Art University, with a BFA in Visual Development and a focus on character and prop designing, Sanchez freelanced in the animation world, most notably at Class Dojo, before jumping into children's books. He received a Sydney Taylor Notable Award for his first children's book IRVING BERLIN. Learn more at jamesreyart.com
A symphony soars in rhyming couplets.
Music lover Greene has created a graceful poem to introduce young readers and listeners to all the sounds and sections of a symphony orchestra. She opens, as a concert would, with the entrance of the musicians, the tuning, and the appearance of the conductor. "Applause! A pause. / Then, instruments as one... // ...all SING." (This particular page turn is particularly artful.) The instruments are appropriately presented and grouped: first strings, then brass, woodwinds, double-reed instruments, percussion, and piano. Italicized musical terms like crescendo, glissando, allegro, and spiccato are gracefully woven into the verse, then defined in a short closing glossary. The poet's rhythm and rhyme also sing, her metaphors add richness, and alliteration makes these lines a delight to read aloud. "French horns, trumpets, tubas blow / with lips abuzzzz and great gusto!" One early misstep aside-the oboe's tuning A is usually much longer than a "chirp"-this is a well-pitched composition. Sanchez's gently humorous animation-style spreads suggest a 21st-century Fantasia with a chubby, White Toscanini-like conductor and a highly diverse set of instrumentalists whose playing moves the audience out of the concert hall and into a variety of settings. Even the endpapers support the theme with musical symbols and a golden trumpet. There are many other introductions-to-the-orchestra titles out there, but few have such charm.
Pleasing to the eye and ear. (Informational picture book. 4-8)
— Kirkus Reviews, STARRED REVIEW

Like a 21st-century update of Lloyd Moss's virtuoso Zin! Zin! Zin! A Violin, this really is a magical, musical book. Musicians of all skin colors and all manner of formal dress, from tux to hijab, chime in from first tune-up to last fabulous note. As the notes crescendo, the entire stage gives way to a dreamscape in electrifying colors of soaring, grooving, intensely focused players, from strings to wind instruments and plenty of percussion. "Listen to those brilliant players building lush harmonic layers. Notes go soaring like an eagle. How majestic! Royal. Regal." The motion of the text plunges readers forward, ever forward, with musicians who are animated, diverse, rapt, and focused. The text at last peaks: "The tempo slows, now more ­subdued. How unique, each movement's mood. It's like a magic music potion-sounds excite, stir up emotion." The notes fade to loud calls from the crowd: "Bravo! Encore!" VERDICT This is no lullaby-this story sings. Share this with children before first concerts, a primer on orchestras, or even just a course on tuneful collaboration.
— School Library Journal, STARRED REVIEW