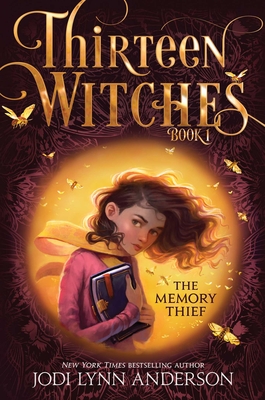 This is book number 1 in the Thirteen Witches series.

Perfect for fans of The Girl Who Drank the Moon, this fantastical and heartfelt first book in a new trilogy from critically acclaimed and New York Times bestselling author Jodi Lynn Anderson follows a girl who must defeat thirteen evil witches.

Twelve-year-old Rosie Oaks’s mom is missing whatever it is that makes mothers love their daughters. All her life, Rosie has known this...and turned to stories for comfort. Then, on the night Rosie decides to throw her stories away forever, an invisible ally helps her discover the Witch Hunter’s Guide to the Universe, a book that claims that all of the evil in the world stems from thirteen witches who are unseen...but also unstoppable. One of these witches—the Memory Thief—holds an insidious power to steal our most precious treasures: our memories. And it is this witch who has cursed Rosie’s mother.

In her quest to save her mom—and with her wild, loyal friend “Germ” by her side—Rosie will find the layers hidden under the reality she only thought she knew: where ghosts linger as shades of the past, where clouds witness the world, and a ladder dangles from the moon leading to something bigger and more. Here, words are weapons against the darkness, and witch hunters are those brave enough to wield their imaginations in the face of the unthinkable. The knowledge of her beloved stories is an arsenal in this world, but to unlock their power, Rosie must dare to have hope and believe in herself in the face of daunting odds.
Jodi Lynn Anderson is the bestselling author of several critically acclaimed books for young people, including the May Bird trilogy, the Thirteen Witches series, and My Diary from the Edge of the World. She lives with her husband, son, and daughter in Asheville, North Carolina, and holds an MFA in writing and literature from Bennington College.

* "Anderson skillfully applies . . . magic to a relatable story of growing up and coming into one’s own. The dynamic between Rosie and Germ rings true in both its reliability and its newly felt strain, and Anderson’s malevolent witches are truly unsettling. First in the Thirteen Witches series, this expertly crafted story thrums with magic, love, and tense action, and it’s a sure bet for Joseph Delaney or Kelly Barnhill fans."
— Booklist, STARRED REVIEW

"A beautiful tale of beauty and darkness. Readers will come to understand the importance of love, friendship and imagination, while being warned against those who feed off of these good parts of the world."
— School Library Journal

"In this novel of ghosts, memory, and story, Anderson (Midnight at the Electric) weaves components of children’s literature mainstays into a dreamlike first-person narrative."
— Publishers Weekly

"The forces of evil (and teenagerhood) prove no match for faithful friendship and inner strength, and Rosie procures both a happy ending and the beginning of a new adventure."
— BCCB