Never Play Music Right Next to the Zoo (Hardcover) 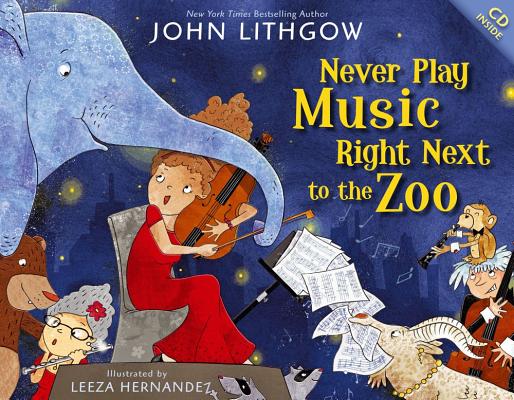 Never Play Music Right Next to the Zoo (Hardcover)

Oh, children! Remember! Whatever you may do,
Never play music right next to the zoo.
They’ll burst from their cages, each beast and each bird,
Desperate to play all the music they’ve heard.

A concert gets out of hand when the animals at the neighboring zoo storm the stage and play the instruments themselves in this hilarious picture book based on one of John Lithgow’s best-loved tunes. This package includes a CD of John and an orchestra performing the song!
John Lithgow is the New York Times bestselling author of I Got Two Dogs; Mahalia Mouse Goes to College; Marsupial Sue Presents: The Runaway Pancake; I’m A Manatee; Micawber; Marsupial Sue; The Remarkable Farkle McBride; and Carnival of the Animals. An award-winning actor, he has starred on stage, film, and television. He performs concerts across the country and has recorded the CDs Farkle and Friends, Singin’ in the Bathtub, and The Sunny Side of the Street. Visit John at JohnLithgow.com.

Leeza Hernandez, an award-winning illustrator and now children’s book author, hails from the south of England, but has been living in New Jersey since 1999. She works as an art director at a local magazine and in her spare time, creatively noodles with new ideas for books in her art studio. She loves to experiment with printmaking, pen and ink, digital collage, and painting.

"The humorous verse is full of zoo creatures and instruments that children will likely want to learn more about. The digital artwork matches the tone and text perfectly. Children will be giggling at both the song and the illustrations, such as the one of a hippo playing a tuba. This would be a great storytime book."
— School Library Journal

"Move over, Carnival of the Animals; here’s another snappy, yet lighter and younger, zoological fantasy to add to Lithgow’s repertoire."
— Kirkus Reviews