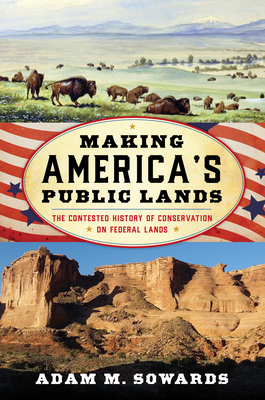 
This book was in stock at the store 24 hours ago but could have sold since then. Please call to confirm if your order is urgent.
In the United States, the federal government owns more than a quarter of the nation's landscape--nearly 640 million acres; or more than a million square miles, which, if consolidated, would make it the tenth largest nation on earth. Primarily managed by four federal agencies--the Bureau of Land Management, the U.S. Forest Service, the U.S. Fish and Wildlife Service, and the National Park Service--American public lands have been central to developing the American economy, state, and identity. The history of these lands intersects with critical components of the American past--namely nature, politics, and economics. From the beginning, the concept of "public" has been the subject of controversy, from visions of homesteaders realizing the ideal of the Jeffersonian republic to western ranchers who use the open range to promote a free enterprise system, to wilderness activists who see these lands as wild places, free from human encumbrance. Environmental historian Adam Sowards synthesizes public lands history from the beginning of the republic to recent controversies. Since public lands are located everywhere, including iconic national parks like Yellowstone or the Grand Canyon, Americans at large have a stake in these lands. They are, after all, ours. In a real sense, this book is for those citizens who camp in the national forests, drive through the national parks, or admire distant wilderness landscapes. These readers will gain a greater appreciation for the long and complex history of the range of these places.
Adam M. Sowards is professor of history at the University of Idaho. He is the author of United States West Coast: An Environmental History (a Choice Outstanding Academic Title for 2008), The Environmental Justice: William O. Douglas and American Conservation, and An Open Pit Visible from the Moon: The Wilderness Act and the Fight to Protect Miners Ridge and the Public Interest (winner of the Western History Association's Hal K. Rothman Book Prize for 2021).