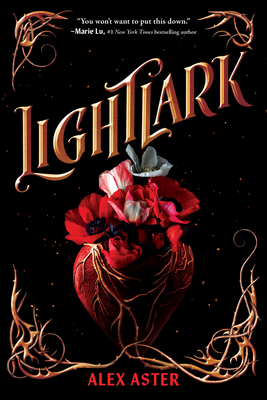 
This book was in stock yesterday at opening but might have sold in the past 24 hrs. If it's needed today, please call & confirm.
An instant #1 National Bestseller—soon to be a major motion picture. #BookTok phenomenon and award-winning author Alex Aster delivers readers a masterfully written, utterly gripping YA fantasy novel

Welcome to the Centennial.

Every 100 years, the island of Lightlark appears to host the Centennial, a deadly game that only the rulers of six realms are invited to play. The invitation is a summons—a call to embrace victory and ruin, baubles and blood. The Centennial offers the six rulers one final chance to break the curses that have plagued their realms for centuries. Each ruler has something to hide. Each realm’s curse is uniquely wicked. To destroy the curses, one ruler must die.

Isla Crown is the young ruler of Wildling—a realm of temptresses cursed to kill anyone they fall in love with. They are feared and despised, and are counting on Isla to end their suffering by succeeding at the Centennial.

To survive, Isla must lie, cheat, and betray…even as love complicates everything.

“Gorgeously lush and cinematic, Lightlark is the kind of fantasy that indulges all your senses, makes you swoon, and then knocks you sideways with twists. You won’t want to put this down.”—Marie Lu, #1 New York Times bestselling author of Skyhunter

“Fantasy that reads like a breath of fresh air. Filled with secrets aplenty and enthralling magic, Lightlark will have you gasping then swooning while these valiant rulers fight to break their curses.”—Chloe Gong, #1 New York Times bestselling author of These Violent Delights

“If The Hunger Games was a dark fairy tale, you’d get the vicious and enchanting Lightlark. Get ready to be transported into a dazzling world where love is a death sentence and the romances between competitors are even fiercer than the curses plaguing the islands.”—Adam Silvera, #1 New York Times bestselling author of They Both Die at the End

“Alex Aster's Lightlark is an ebullient, fast-paced fantasy, with a beautifully rendered world that seethes with intrigue, romance and tension. I couldn't turn the pages fast enough.” —Sabaa Tahir, #1 New York Times bestselling author of An Ember in the Ashes

"Grim, one of Isla’s love interests, is a total scene-stealer. . .their steamy scenes are a definite highlight." —Kirkus Reviews