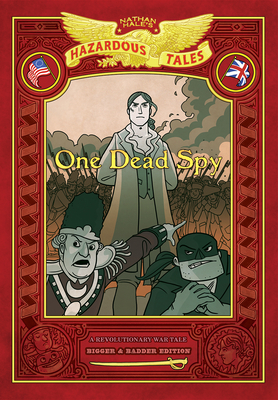 
This book was in stock at the store 24 hours ago but could have sold since then. Please call to confirm if your order is urgent.
Experience the New York Times bestselling graphic novel—now as a deluxe, oversized edition featuring 15 brand-new pages of mini-comics

Nathan Hale (the author’s namesake) was America’s first spy, a Revolutionary War hero who famously said “I only regret that I have but one life to lose for my country” before being hanged by the British. In Nathan Hale’s Hazardous Tales, author Hale channels his historical döppelganger to present history’s roughest, toughest, strangest stories. This book tackles the story of Nathan Hale himself, who was an officer for the American rebels in the Revolutionary War and was eventually hanged for spying. This special edition of One Dead Spy features a larger trim size, a deluxe package, and 16 pages of bonus material, including research photos, sketches, and mini-comics from the author.

Nathan Hale’s Hazardous Tales are graphic novels that tell the thrilling, shocking, gruesome, and TRUE stories of American history. Read them all—if you dare!
Nathan Hale is the #1 New York Times bestselling author and illustrator of the Nathan Hale’s Hazardous Tales series, which includes One Dead Spy; Donner Dinner Party; Treaties, Trenches, Mud and Blood; Big Bad Ironclad!; and The Underground Abductor, one of which earned a place on the Texas Bluebonnet Award Master List. He also illustrated the graphic novel Rapunzel’s Revenge, which was a TODAY show “Al’s Book Club for Kids” selection, an ALA-ALSC Notable Children’s Book, and a YALSA Great Graphic Novel for Teens, as well as the recipient of three starred reviews. Nathan lives in Provo, Utah. www.hazardoustales.com.