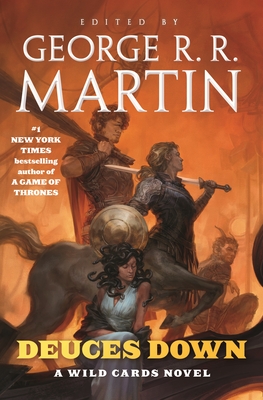 This is book number 16 in the Wild Cards series.

An anthology about the Wild Cards who are underestimated, overlooked: the Deuces. But it’s the quiet ones you have to watch out for.

In this revised collection of classic Wild Cards stories, the spotlight is on the most unusual Wild Cards of them all—the Deuces, people with minor superpowers. But their impact on the world should not be underestimated, as we see how they’ve affected the course of Wild Cards’ alternate history. This collection also features exclusive art to accompany these stories.

In Deuces Down, iconic celebrities and landmark events are seen in a whole new light, such as John Jos. Miller’s exciting 1969 World Series between the Baltimore Orioles and the Brooklyn Dodgers; Michael Cassutt’s first moon landing, when the world wasn’t watching; Walter Simons’ Great New York City Blackout of 1977; and Melinda M. Snodgrass’s account of Grace Kelly’s mysterious disappearance during the filming of The French Lieutenant’s Woman.


Being developed for TV!

Rights to develop Wild Cards have been acquired by Universal Cable Productions, the team behind The Magicians and Mr. Robot, with the co-editor of Wild Cards, Melinda M. Snodgrass, as executive producer.

George R. R. Martin has been a full-time writer for over 25 years. He is the author of the acclaimed, internationally bestselling fantasy series A Song of Ice and Fire, which is the basis of HBO's popular Game of Thrones television series. Martin has won multiple science fiction awards, including 4 Hugos, 2 Nebulas, the Bram Stoker, the Locus Award, the World Fantasy Award, the Daedelus, the Balrog, and the Daikon (Japanese Hugo).

Praise for the Wild Cards series

“Perhaps the most original and provocative of the shared worlds books.” —Peter S. Beagle, author of The Last Unicorn

"Delicious...Everything I hoped for in a new Wild Cards book. The character interactions and plot twists have exactly the complexity, surprise, and unsentimental realism I'd expect out of a George R. R. Martin project." —Austin Grossman, author of Soon I Will be Invincible on Inside Straight

“This is a wild ride of good, blood-pumping fun that packs a surprisingly emotional punch for a book that looks on the surface like just another superhero adventure.” — Publishers Weekly on High Stakes

“Emotionally powerful. Wild Cards deals up the variety of short fiction without losing the continuity of a novel.”—The Seattle Times

“Longtime fans will enjoy surprise appearances by previous notables, sometimes in drastically altered circumstances, and this entry also works well as a standalone. It’s a treat for any fan of superhero stories.” — Publishers Weekly on Low Chicago

“The shared-world series known as Wild Cards has had a long and illustrious history of contributors and achievements.” —SciFi.com

“New readers and fans of the long-running series will both love the fast-paced plotting and the ever-expanding history of the Wild Card virus on this alternate Earth, where even the superheroes are human.” —Shelf Awareness on Lowball