Blizzard of Glass: The Halifax Explosion of 1917 (Paperback) 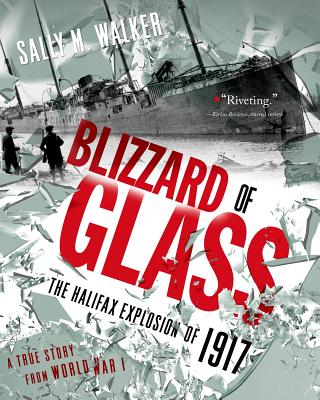 Blizzard of Glass: The Halifax Explosion of 1917 (Paperback)

On December 6, 1917, two ships collided in Halifax Harbor in Nova Scotia, Canada. One ship was loaded top to bottom with munitions and the other held relief supplies, both intended for war-torn Europe. The resulting blast flattened two towns, Halifax and Dartmouth, and killed nearly 2,000 people. As if that wasn't devastating enough, a blizzard hit the next day, dumping more than a foot of snow on the area and paralyzing much-needed relief efforts.
Fascinating, edge-of-your-seat storytelling based on original source material conveys this harrowing account of tragedy and recovery.

This thoroughly-researched and documented book can be worked into multiple aspects of the common core curriculum.

Sally M. Walker is the author of Champion, a JLG selection, one of NCTE's 2019 Orbis Pictus Honor Books, and a 2019 NSTA Outstanding Science Trade Book. She is also the author of ALA Notable Blizzard of Glass: The Halifax Explosion of 1917; the acclaimed picture book Winnie; and Secrets of a Civil War Submarine, which was awarded a Sibert Medal. She lives in Illinois.

“The well-designed volume clearly depicts the extent of the devastation in both words and photographs. . . . As usual, this author's source notes and use of primary sources serves as a model of nonfiction writing.” —Shelf Awareness

“Disasters make for gripping reading, and this account of the huge explosion of a munitions ship and its devastating effects in Halifax Harbor, Canada, in 1917 tells the dramatic history with clear detailed facts.” —Booklist

“Halifax does indeed have a story to tell, but Walker once again proves that it's her consummate gifts as a storyteller that breathe life into the tale.” —The Horn Book

“This tragic, but well-told story belongs in most collections.” —School Library Journal