Stonewall: Breaking Out in the Fight for Gay Rights (CD-Audio) 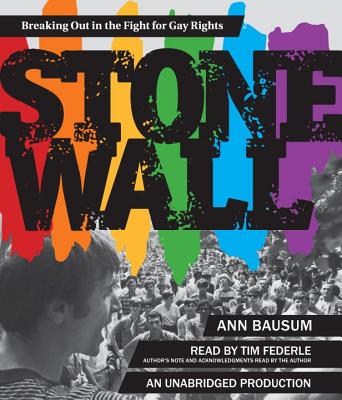 Stonewall: Breaking Out in the Fight for Gay Rights (CD-Audio)


Ask us a question if anything isn't clear. Thanks!
That’s the Stonewall.
The Stonewall Inn.
Pay attention.
History walks through that door.

In 1969 being gay in the United States was a criminal offense. It meant living a closeted life or surviving on the fringes of society. People went to jail, lost jobs, and were disowned by their families for being gay. Most doctors considered homosexuality a mental illness. There were few safe havens. The Stonewall Inn, a Mafia-run, filthy, overpriced bar in New York City’s Greenwich Village, was one of them.

Police raids on gay bars happened regularly in this era. But one hot June night, when cops pounded on the door of the Stonewall, almost nothing went as planned. Tensions were high. The crowd refused to go away. Anger and frustration boiled over.

The raid became a riot.

The riot became a catalyst.

The catalyst triggered an explosive demand for gay rights.

Ann Bausum’s riveting exploration of the Stonewall Riots and the national Gay Rights movement that followed is eye-opening, unflinching, and inspiring.
Ann Bausum writes about history for readers of all ages. Stonewall is her twelfth book and her first book for Viking. Ann has written frequently about social justice history in the United States, including the fight for women’s voting rights (With Courage and Cloth), the 1961 struggle for integrated interstate transportation in the South (Freedom Riders), and the Memphis, Tennessee, campaign to unionize sanitation workers that led to the death of Martin Luther King, Jr. (Marching to the Mountaintop). Among other recognitions, her books for children and teens have received a Sibert Honor, the Jane Addams Children’s Book Award, the Golden Kite Award, and, on two occasions, the Carter G. Woodson Award. Ann lives in southern Wisconsin. Visit her website at www.AnnBausum.com or follow her on Facebook and Twitter.