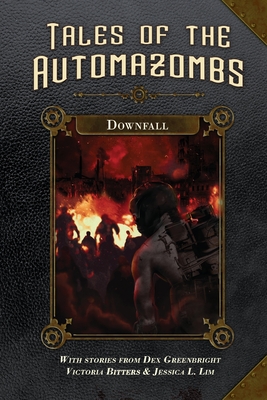 All the best intentions of the Inventors Guild have failed. Survivors of the Automazomb attacks are infected with a new, more terrifying plague. Consumed by a hateful emptiness and robbed of thought, these victims lash out at everyone they see. When they die, their symptoms only worsen. Everyone bitten spreads the disease until no place remains clean.

Soon, fear rules Eysan. To be alive is to be hunted. The dead swarm the cities of land and sky alike. They roam, endlessly searching for living flesh to consume, fueling a hunger that can never be sated.

As the world falls apart, a few brave men and women continue to fight and plan for a future that looks increasingly dim.

Tales of the Automazombs: Downfall is the final book in the main series, set in a steampunk world. Each short story within gives a glimpse of the larger world and the dread monsters created in a desperate attempt to save it. In this second edition of the book, there are minor edits and a respectful update to the name of one of our authors.