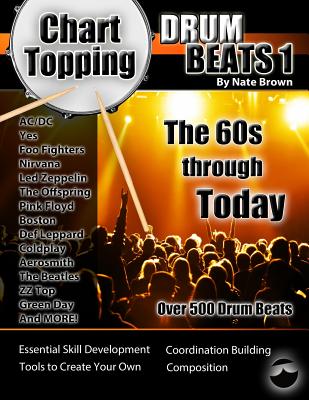 
Estimated arrival to store from West coast warehouse: 2 days. From East coast warehouse: 8 to 10 days.
This book is non-returnable. We will confirm your order with you before placing to be sure you acknowledge and accept.
Exploring drum beats from the 60s through today's most popular music, Chart-Topping Drum Beats is designed to develop your skills through sequential lessons with an emphasis on coordination, drum beat vocabulary, and a strong emphasis on drum beat selection -- knowing what to play and when. Upon completion of this book, you will have dissected over 150 drum beats from chart-topping songs and over 390 coordination building exercises.
Nate Brown received his bachelor's degree in education from John Carroll University in Cleveland, OH and has over 18 years of teaching experience. Nate authored the Alfred Publishing's 2013 book Alfred's Beginning Workbook For Snare Drum, the feature article for Drum! Magazine, Dr. Fill: A Step-By-Step Approach To Unleashing Your Creative Fill Potential, and a number of ebook releases by OnlineDrummer.com: Take Control Of Your Accents, The Rock Shuffle, 108 Ways To Leave Your Paradiddle, Ostinato Threes, and I Ain't Afraid of No Ghost. Along with writing, Nate is a well-established video clinician, running three monthly video lesson series including Drum! Magazine's Groove Analysis Lesson Series, OnlineDrummer.com's Monday Lesson Series, and Jammit.com's Tuesday Lesson Series. He also appeared in the DVD Drumming For Fanatics by Drum! Magazine and Alfred Publishing and performed at the San Jose Drum! Night 2012. Nate's video lessons have received over 10,000,000 views to date. Nate is also publisher of the popular educational website, OnlineDrummer.com. This site has gained multiple honors under his leadership including being recommended in the book Drums For Dummies (2nd edition), 2014 Best Website Runner-up Drum! Magazine Poll, and being touted in the London Metro as, "The ideal place to find out about drumming." Nate's vision for OnlineDrummer.com is to bring drumming education by talented teachers to everyone with the desire to learn.