A History of Civilization in 50 Disasters (History in 50) (Hardcover) 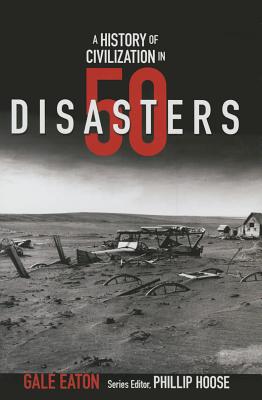 A History of Civilization in 50 Disasters (History in 50) (Hardcover)

The earth shakes and cracks open. Volcanoes erupt. Continents freeze, bake, and flood. Droughts parch the land. Wildfires and hundred-year storms consume anything in their paths. Invisible clouds of disease and pestilence probe for victims. Tidal waves sweep ashore from the vast sea. The natural world is a dangerous place, but one species has evolved a unique defense against the hazards: civilization.

Civilization rearranges nature for human convenience. Clothes and houses keep us warm; agriculture feeds us; medicine fights our diseases. It all works—most of the time. But key resources lie in the most hazardous places, so we choose to live on river flood plains, on the slopes of volcanoes, at the edge of the sea, above seismic faults. We pack ourselves into cities, Petri dishes for germs. Civilization thrives on the edge of disaster.   And what happens when natural forces meet molasses holding tanks, insecticides, deepwater oil rigs, nuclear power plants? We learn the hard way how to avoid the last disaster—and maybe how to create the next one. What we don’t know can, indeed, hurt us.   This book’s white-knuckled journey from antiquity to the present leads us to wonder at times how humankind has survived. And yet, as Author Gale Eaton makes clear, civilization has advanced not just in spite of disasters but in part because of them. Hats off to human resilience, ingenuity, and perseverance! They’ve carried us this far; may they continue to do so into our ever-hazardous future.

The History in 50 series explores history by telling thematically linked stories. Each book includes 50 illustrated narrative accounts of people and events—some well-known, others often overlooked—that, together, build a rich connect the-dots mosaic and challenge conventional assumptions about how history unfolds.


Gale Eaton has spent a lifetime with books for children and young adults, first as a children’s librarian at the Boston Public Library and the Berkshire Athenaeum, and later as a professor of children’s literature at the University of Rhode Island Graduate School of Library and Information Studies. She is the author of four other books.

Phillip Hoose is the widely acclaimed author of books, essays, stories, songs, and articles including the National Book Award - and Newbery Honor - winning book Claudette Colvin: Twice toward Justice and the Boston Globe-Horn Book Honor winner The Boys Who Challenged Hitler: Knud Pedersen and the Churchill Club. A graduate of Indiana University and the Yale School of Forestry and Environmental Sciences, Hoose was for 37 years a staff member of The Nature Conservancy, dedicated to preserving the plants, animals, and natural communities of the Earth.
Lest readers get preoccupied by body counts and deciding which disaster was the worst, the real lessons to be derived are discussed in a brief conclusion. What's most important is how people responded to the disasters: some people became heroes, some organized relief efforts, some looted, some blamed others, and some got to work trying to prevent future disasters. ... A fascinating volume especially suited for browsing. (glossary, sources and additional resources, endnotes, index)
— Kirkus

When given the choice of which book to review, the title of this one stood out to me.  I live in Oregon, and right now there is an increasing risk of earthquakes, volcanoes and tsunamis in the state.  If it’s going to happen I might as well know what to do. (I guess it also counts as studying world history.)

The author did a fantastic job of compiling information and photographs to support the main event of each chapter.  It was interesting that several of the events I had never even heard of.  The book showed me that government tended to blame foreigners or minorities for the disasters, even when sometimes it was unknowingly of their own doing.  Another thing that surprised me was that the disasters that took more lives were not volcanoes or earthquakes.  More often than not, it was sickness, or an outbreak of a disease. (The Bubonic Plague, for example, killed about 1/3 of Europe’s population.)

When the volcanoes and earthquakes did happen, they usually gave weeks or even months of warning, and the most damage happened when people did not evacuate. (That’s one piece of information I can use! When they tell me to evacuate, I will!)

I really enjoyed this book and I hope other readers will, too.  I would recommend it for ages 12 and up. It can also be used as a teaching resource in a classroom.