A Punkhouse in the Deep South: The Oral History of 309 (Paperback) 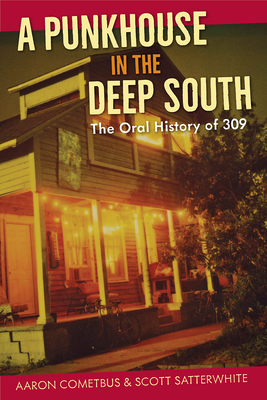 A Punkhouse in the Deep South: The Oral History of 309 (Paperback)

Radical subcultures in an unlikely place

Told in personal interviews, this is the collective story of a punk community in an unlikely town and region, a hub of radical counterculture that drew artists and musicians from throughout the conservative South and earned national renown.

The house at 309 6th Avenue has long been a crossroads for punk rock, activism, veganism, and queer culture in Pensacola, a quiet Gulf Coast city at the border of Florida and Alabama. In this book, residents of 309 narrate the colorful and often comical details of communal life in the crowded and dilapidated house over its 30-year existence. Terry Johnson, Ryan "Rymodee" Modee, Gloria Diaz, Skott Cowgill, and others tell of playing in bands including This Bike Is a Pipe Bomb, operating local businesses such as End of the Line Cafe, forming feminist support groups, and creating zines and art.

Each voice adds to the picture of a lively community that worked together to provide for their own needs while making a positive, lasting impact on their surrounding area. Together, these participants show that punk is more than music and teenage rebellion. It is about alternatives to standard narratives of living, acceptance for the marginalized in a rapidly changing world, and building a sense of family from the ground up.

Including photos by Cynthia Connolly and Mike Brodie, A Punkhouse in the Deep South illuminates many individual lives and creative endeavors that found a home and thrived in one of the oldest continuously inhabited punkhouses in the United States.