An Open Pit Visible from the Moon: The Wilderness Act and the Fight to Protect Miners Ridge and the Public Interest (Hardcover) 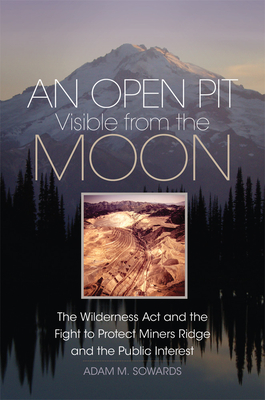 An Open Pit Visible from the Moon: The Wilderness Act and the Fight to Protect Miners Ridge and the Public Interest (Hardcover)

Situated among the North Cascade Mountains of Washington State, in the Glacier Peak Wilderness Area, Miners Ridge contains vast quantities of copper. Kennecott Copper Corporation's plan to develop an open-pit mine there was, when announced in 1966, the first test of the mining provision of the Wilderness Act passed by Congress in 1964. The battle over the proposed "Open Pit, Big Enough to Be Seen from the Moon," as activists called it, drew the attention of both local and national conservationists, who vowed to stop the desecration of one of the West's most scenic places. Kennecott Copper had the full force of the law and mining industry behind it in asserting its extractive rights. Meanwhile the U.S. Forest Service was determined to defend its authority to manage wilderness.

An Open Pit Visible from the Moon tells the story of this historic struggle to define the contours of the Wilderness Act--its possibilities and limits. Combining rigorous analysis and deft storytelling, Adam M. Sowards re-creates the contest between Kennecott and its shareholders on one hand and activists on the other, intent on maintaining wilderness as a place immune to the calculus of profit. A host of actors cross these pages--from cabinet secretaries and a Supreme Court justice to local doctors and college students--all contributing to a drama that made Miners Ridge a cause c l bre for the nation's wilderness movement. As locals testified at public hearings and writers penned profiles in the nation's magazines and newspapers, the volatile political economy of copper proved equally influential in frustrating Kennecott's plans.

No law or court ruling could keep Kennecott from mining copper, but the pit was never dug. Identifying the contingent factors and forces that converged and coalesced in this case, Sowards's narrative recalls a critical moment in the struggle over the nation's wild places, even as it puts the unpredictability of history on full display.