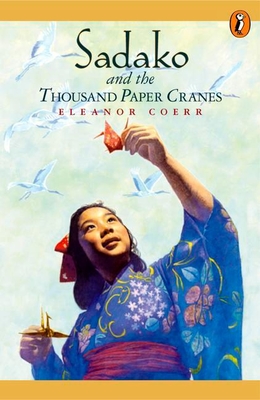 
Estimated arrival to store from West coast warehouse: 2 days. From East coast warehouse: 8 to 10 days.
Hiroshima-born Sadako is lively and athletic--the star of her school's running team. And then the dizzy spells start. Soon gravely ill with leukemia, the "atom bomb disease," Sadako faces her future with spirit and bravery. Recalling a Japanese legend, Sadako sets to work folding paper cranes. For the legend holds that if a sick person folds one thousand cranes, the gods will grant her wish and make her healthy again. Based on a true story, Sadako and the Thousand Paper Cranes celebrates the extraordinary courage that made one young woman a heroine in Japan.
Eleanor Coerr was born in Kamsack, Saskatchewan, Canada, and grew up in Saskatoon. Two of her favorite childhood hobbies were reading and making up stories. Eleanor began her professional life as a newspaper reporter and editor of a column for children. Luckily, she traveled to Japan in 1949 as a writer for the Ottawa Journal, since none of the other staff wanted to go to a country that had been devastated by war. Coerr is the writer of numerous children's book and picture books.

Born in Cleveland Ohio, renowned illustrator Ronald Himler attended the Cleveland Institute of Art, where he majored in painting and illustration. Himler's primary focus is children's books, but he's also gained quite a following in regards to his more mature work. Ron has earned many awards over the course of his career, including the prestigous Society of Illustrators Silver Medal for the cover of Red Cap.
"This an extraordinary book, one no reader will fail to find compelling and unforgettable." -Booklist, starred review

"The story speaks directly to young readers of the tragedy of Sadako's death and, in its simplicity, makes a universal statement for 'peace in the world.' " -The Horn Book