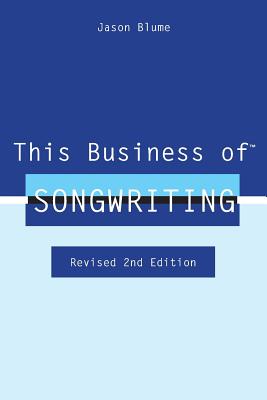 
Estimated arrival to store from West coast warehouse: 2 days. From East coast warehouse: 8 to 10 days.
This book is non-returnable. We will confirm your order with you before placing to be sure you acknowledge and accept.
Writing great songs is not enough. To make money, songwriters need a firm, realistic grasp of how songs generate income, and how the songwriting business works. This Business of Songwriting is the first book to demystify the process of doing business as a songwriter. Author Jason Blume is a songwriter, music publisher, and educator whose songs are on albums that have sold more than 50 million copies, topped international charts, and are in top television shows and movies. He starts by defining terms and explaining the mechanics of how songwriters generate and collect royalties. The functions of music publishers, record labels, performing rights organizations, and the Harry Fox Agency are clarified, as are mechanical, performance, and print licensing; statutory mechanical royalty rates; estimates of the amounts earned for synchronization and master use licenses; and performance royalties for radio, television, and Internet broadcasts. He also includes a section on digital licensing and royalties.Samples of virtually every contract a songwriter might likely encounter are included, and with top music industry attorneys as consultants, Blume translates these contracts from legaleze to plain English--one paragraph at a time. Included contracts are: Single Song Publishing Agreement; Staff-Writing Agreement; Administration Deal; Collaborators' Agreement; Work-for-Hire Agreement; Mechanical License; Synchronization License; Lyric Reprint Licensing Agreement; Subpublishing Contract; and Copyright Form PA. The book walks readers step-by-step through the process of effectively pitching songs to publishers, artists, managers, A&R representatives, and producers. A chapter about writing and marketing music for television and films explains the process of "clearing" music, and the functions of music supervisors and production music libraries, as well as offering resources for reaching these decision-makers. Additional chapters explain self-publishing, and address the business considerations unique to performing songwriters, as well as those who are targeting special markets, such as Christian music, children's music, video games, and musical theater.This comprehensive text also includes sample lyric sheets and cover letters, as well as advice about how many songs to include--and how to attract attention--when approaching music industry professionals. It also includes a detailed explanation of how the singles and album charts work, and throughout, provides valuable information about how to make money writing songs. This Business of Songwriting is a one-volume resource that teaches the skills and knowledge every songwriter and music publisher needs to succeed.Here's what music professionals are saying about This Business of Songwriting: "If you are serious about being a professional writer, Jason has compiled the most comprehensive how-to guide I have ever read. All the way from getting a writing deal to understanding it once you get one. This is a must read -- Tom Luteran, V.P./Creative, Sony Music PublishingJason Blume's latest book is a must read for anyone serious about songwriting, whether you're just starting out or you're a seasoned professional. The writing is clear, concise and comprehensive, covering everything from how to dress for a pitch meeting to how to decipher sub clauses in a sync license. Highly recommended. -- Bob Regan, Grammy Nominated Songwriter/Adjunct Songwriting Professor, Belmont University/President, Nashville Songwriters Association International"Jason Blume has created songwriting's Rosetta Stone. Encyclopedic in scope, This Business of Songwriting unravels industry enigmas and firmly imparts a sense of direction to tomorrow's hit makers." -- Paul Corbin, VP Writer/Publisher Relations, BMI"If you're serious about your songwriting, this book will give you the information you need to be serious about your business."-- Timothy Fink, V.P., Writer / Publisher Relations, SESAC.
Jason Blume's songs are on three Grammy-nominated albums and have sold more than 50,000,000 copies. One of only a few writers to ever have songs on the pop, country, and R&B charts, all at the same time--his songs have been recorded by diverse artists including Britney Spears, the Backstreet Boys, Jesse McCartney, the Nashville Chamber Orchestra, and international stars such as Christian Ingebrigtsen, Tomohisa Yamashita (#1 EP, Japan), Hi-5 (winners of Greek Idol), and BYentl (#6 single, the Netherlands), as well as country music stars including Collin Raye (6 cuts), the Oak Ridge Boys, Steve Azar, and John Berry ("Change My Mind," a top 5 single that earned a BMI "Million-Aire" Award for garnering more than one million airplays). His songs have been included in films and television shows including "Scrubs," "Friday Night Lights," "Assassination Games," Disney's "Kim Possible" and "First Kid," MTV's "Next Thing" and "Taking the Stage," "MVP," "The Dating Guy," "Barbie of Swan Lake," "Dangerous Minds," "Kickin' it Old Skool," "Fame," "The Guiding Light," "The Miss America Pageant," and many more. Jason Blume is the author of 6 Steps to Songwriting Success: The Comprehensive Guide to Writing and Marketing Hit Songs, and Inside Songwriting: Getting to the Heart of Creativity, (both published by Billboard Books). He also produced and narrates a 4-part instructional audio CD series. When he is not writing hit songs he teaches others how to do so. Acknowledged as one of the world's top songwriting instructors, Blume developed and teaches the BMI Nashville Songwriters workshops. He presented an acclaimed master class at the Liverpool Institute for Performing Arts (founded by Sir Paul McCartney) and has taught at conferences, colleges, and universities throughout the U.S. and in countries including Australia, New Zealand, Norway, Ireland, the U.K., Canada, Bermuda, and Jamaica. After twelve years as a staff-writer for Zomba Music, Blume now runs Moondream Music Group. For additional information, visit www.jasonblume.com