Murder Among Friends: How Leopold and Loeb Tried to Commit the Perfect Crime (Hardcover) 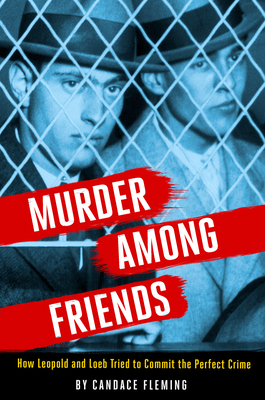 Murder Among Friends: How Leopold and Loeb Tried to Commit the Perfect Crime (Hardcover)


Estimated arrival to store from West coast warehouse: 2 days. From East coast warehouse: 8 to 10 days.
How did two teenagers brutally murder an innocent child...and why? And how did their brilliant lawyer save them from the death penalty in 1920s Chicago? Written by a prolific master of narrative nonfiction, this is a compulsively readable true-crime story based on an event dubbed the "crime of the century."

In 1924, eighteen-year-old college students Nathan Leopold and Richard Loeb made a decision: they would commit the perfect crime by kidnapping and murdering a child they both knew. But they made one crucial error: as they were disposing of the body of young Bobby Franks, whom they had bludgeoned to death, Nathan's eyeglasses fell from his jacket pocket.

Multi-award-winning author Candace Fleming depicts every twist and turn of this harrowing case--how two wealthy, brilliant young men planned and committed what became known as the crime of the century, how they were caught, why they confessed, and how the renowned criminal defense attorney Clarence Darrow enabled them to avoid the death penalty.

Following on the success of such books as The Rise and Fall of Charles Lindbergh and The Family Romanov, this acclaimed nonfiction writer brings to heart-stopping life one of the most notorious crimes in our country's history.
Candace Fleming is the prolific and versatile award-winning author of many books for children and young adults. Her most recent title, The Rise and Fall of Charles Lindbergh, received six starred reviews, was a Kirkus, PW, Booklist, and SLJ Best Book of the Year, and was hailed by the Wall Street Journal as a "fascinating chronicle." Candace's The Family Romanov also received six starred reviews and won the Boston Globe-Horn Book Award for Nonfiction and the Los Angeles Times Book Prize, and was recognized as a Sibert Nonfiction Honor Book. Amelia Lost received four starred reviews and won the Golden Kite Award for Nonfiction. Her many acclaimed picture books include Giant Squid, a Sibert Honor Book. Visit her on the web at candacefleming.com.

★ "An absorbing saga sure to ensnare readers in its thrall." —Publishers Weekly, starred review

★ "In the field of YA narrative nonfiction, Fleming continues to outdo herself." —The Horn Book, starred review

★ "The engrossing true-crime narrative style and high-interest subject will likely make this a very popular pick among teen readers.... Thought-provoking reading sure to spark further conversations about crime and punishment." —Booklist, starred review