On the Origin of Time: Stephen Hawking's Final Theory (Hardcover) 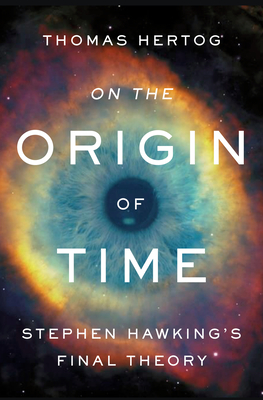 On the Origin of Time: Stephen Hawking's Final Theory (Hardcover)

Perhaps the biggest question Stephen Hawking tried to answer in his extraordinary life was how the universe could have created conditions so perfectly hospitable to life. Pondering this mystery led Hawking to study the big bang origin of the universe, but his early work ran into a crisis when the math predicted many big bangs produce a multiverse, most of which would be far too bizarre to ​harbor life.

Holed up in the theoretical physics department at Cambridge, Stephen Hawking and his friend and collaborator Thomas Hertog worked shoulder to shoulder for twenty years, developing a new theory of the cosmos that could account for the emergence of life. Peering into the extreme quantum physics of cosmic holograms and venturing far back in time to our deepest roots, they were startled to find a deeper level of evolution in which the physical laws themselves transform and simplify until particles, forces, and even time itself fades away. This discovery led them to a revolutionary idea: the laws of physics are not set in stone but are born and co-evolve as the universe they govern takes shape. As Hawking’s final days drew near, the two collaborators published their theory, proposing a radical new Darwinian perspective on the origins of our universe.

On the Origin of Time offers a striking fresh vision of the universe’s birth that will profoundly transform the way we think about our place in the order of the cosmos and may ultimately prove to be Hawking’s greatest scientific legacy.
Thomas Hertog is an internationally renowned cosmologist who was for many years a close collaborator of Stephen Hawking. He received his doctorate from the University of Cambridge and is currently professor of theoretical physics at the University of Leuven, where he studies the quantum nature of the big bang. He lives with his wife and their four children in Bousval, Belgium.
“Why is our universe the way it is? How did everything begin? How might it end? Thomas Hertog probed these overwhelming questions in collaboration with Stephen Hawking, achieving a privileged perspective into how, struggling against daunting physical odds, Hawking’s imprisoned mind yielded astonishing insights even in his later years. This superbly written book offers insight into an extraordinary individual, the creative process generally, and the scope and limits of our current understanding of the cosmos.”—Lord Martin Rees, Emeritus Professor of Cosmology and Astrophysics, University of Cambridge, and author of Just Six Numbers

“Like his mentor and colleague Stephen Hawking, Thomas Hertog has never shied away from being ambitious in theorizing about the universe. This sweeping book provides an accessible overview of both what we know about cosmology and some audacious ideas for moving into the unknown. It is an introduction to Hawking’s final theory, but also a glimpse into even grander theories yet to come.”—Sean Carroll, author of The Biggest Ideas in the Universe: Space, Time, and Motion

“Stephen Hawking’s final theory is lucidly explained in this splendidly accessible book. Author Thomas Hertog, one of Hawking’s closest collaborators, gives us a vivid insight into Hawking as both a brilliant physicist and an astonishingly determined human being.”—Graham Farmelo, Churchill College, University of Cambridge, and author of The Strangest Man

“A beautifully written, thought-provoking account of both the physics and the personalities involved in Hawking’s visionary struggle to comprehend the cosmos. Thomas Hertog has provided a fascinating insider’s view.”—Neil Turok, co-author of Endless Universe