The World: A Family History of Humanity (Hardcover) 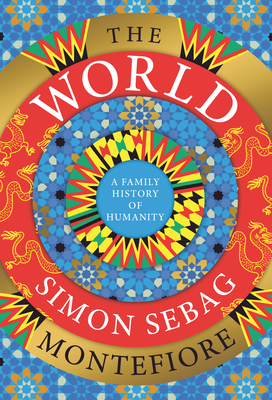 The World: A Family History of Humanity (Hardcover)


Coming Soon - Please Pre-Order Now
A magisterial world history unlike any other that tells the story of humanity through the one thing we all have in common: families • From the New York Times best-selling author of The Romanovs

“Succession meets Game of Thrones.” —Daily Mail Plus • “The author brings his cast of dynastic titans, rogues and psychopaths to life...An epic that both entertains and informs.” —The Economist, Best Books of the Year

Around 950,000 years ago, a family of five walked along the beach and left behind the oldest family footprints ever discovered. For award-winning historian Simon Sebag Montefiore, these poignant, familiar fossils serve as an inspiration for a new kind of world history, one that is genuinely global, spans all eras and all continents, and focuses on the family ties that connect every one of us.

In this epic, ever-surprising book, Montefiore chronicles the world’s great dynasties across human history through palace intrigues, love affairs, and family lives, linking grand themes of war, migration, plague, religion, and technology to the people at the heart of the human drama. It features a cast of extraordinary diversity: in addition to rulers and conquerors, there are priests, charlatans, artists, scientists, tycoons, gangsters, lovers, husbands, wives, and children. There is Hongwu, the beggar who founded the Ming dynasty; Ewuare, the Leopard-King of Benin; Henry Christophe, King of Haiti; Kamehameha, the conqueror of Hawaii; Zenobia, the Arab empress who defied Rome; Lady Murasaki, the first female novelist; Sayyida al-Hurra, the Moroccan pirate-queen. Here too are moderns such as Indira Gandhi, Margaret Thatcher, Barack Obama, Vladimir Putin, and Volodymyr Zelensky. Here are the Caesars, Medicis and Incas, Ottomans and Mughals, Bonapartes, Habsburgs and Zulus, Rothschilds, Rockefellers and Krupps, Churchills, Kennedys, Castros, Nehrus, Pahlavis and Kenyattas, Saudis, Kims and Assads. These powerful families represent the breadth of human endeavor, with bloody succession battles, treacherous conspiracies, and shocking megalomania alongside flourishing culture, moving romances, and enlightened benevolence. A dazzling achievement as spellbinding as fiction, The World captures the whole human story in a single, masterful narrative.
SIMON SEBAG MONTEFIORE is a historian whose best-selling books have been published in forty-eight languages and won numerous awards including the Costa Biography Award and the Los Angeles Times Book Prize. His books include Catherine the Great and Potemkin; Stalin; Young Stalin; Jerusalem; The Romanovs; and the acclaimed Moscow Trilogy of novels, as well as Written in History and Voices of History. He received his Ph.D. from Cambridge, and is a Fellow of the Royal Society of Literature. He lives in London.

“A staggering achievement. Simon Sebag Montefiore has given us a tremendous gift: a pulsingly readable world history through the millennia and from one end of the globe to the other.”
—Sir Simon Schama, author of The Story of the Jews

“A tour de force. Hugely ambitious, erudite and filled with surprises. This puts the family and families back into the heart of history.”
—Peter Frankopan, New York Times best-selling author of Silk Roads

“Compelling, moving, epic, and diverse, Montefiore’s wonderful storytelling prowess and wide research pulls off this unparalleled world history in a single narrative with unforgettable style. All the drama of humankind is here from cavemen to Putin and Zelensky.”
—Olivette Otele, author of African Europeans

“In this work of astonishing scope and erudition, Simon Sebag Montefiore interweaves the stories of the servants, courtiers, and kings, pioneers, preachers, and philosophers who have made history. A brilliant synthesis that will impart fresh insight to even the most learned readers.”
—Henry Kissinger, former U.S. Secretary of State