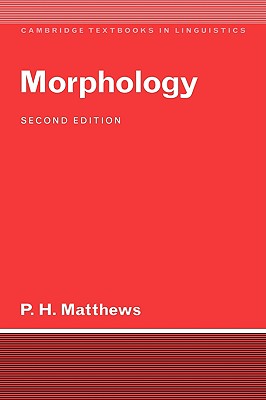 
Estimated arrival to store from West coast warehouse: 2 days. From East coast warehouse: 8 to 10 days.
This book is non-returnable. We will confirm your order with you before placing to be sure you acknowledge and accept.
This is an updated and substantially revised edition of Peter Matthews's well-known Morphology, first published in 1974. It includes chapters on inflectional and lexical morphology, derivational processes and productivity, compounds, paradigms, and much new material on markedness and other aspects of iconicity. As in the first edition, the theoretical discussion is eclectic and critical: its scope ranges from the ancient grammarians to the work of Chomsky and his followers, the disintegration of the classical Chomskyan scheme, and the renewed standing of morphology and historical linguistics in recent years. The examples are drawn from English and other European languages, both ancient and modern. The work will appeal to both specialists in particular languages--it contains much original material--and students of general linguistics. For this new edition much now obsolete discussion has been removed and replaced by discussion of current trends, and the further reading sections have been thoroughly updated.