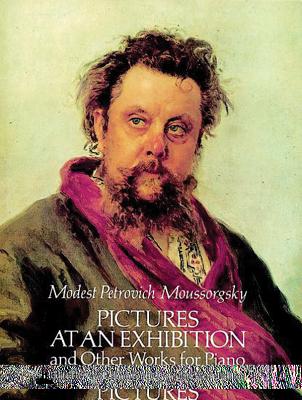 This volume contains virtually every work Moussorgsky ever composed for the piano, including his piano arrangements and alternative versions of several pieces. It reprints all the music from the famous critical complete works edition prepared by Favel Lamm and published in Moscow in 1931.
Shortly after Boris Godunov premiered in 1874, Moussorgsky composed a set of ten tonal depictions for piano. Unpublished until 1886, five years after the composer's death, Pictures at an Exhibition has since become a great favorite of musical artists and their audiences, one of the most admired and performed of piano masterworks. Moussorgsky was inspired to compose the work while viewing a memorial exhibition of paintings by his friend Victor Hartmann. In each of the short pieces, he interpreted the subject of one of Hartmann's pictures -- children playing in the gardens of the Tuileries, the bustling marketplace at Limoges, the witch Baba Yaga, and more, all leading to the exhilarating finale evoking the great Heroes' Gate at Kiev.
The volume also includes the well-known piano arrangement of the Hopak from the opera Sorochintsy Fair, the pensive Une larme, the whimsical Ein Kinder-Scherzo and the Allego and Scherzo from the incomplete Sonata for piano four hands. Together with other lesser-known but engaging short works, these compositions offer pianists the opportunity to explore the keyboard legacy of one of the most powerful and original composers of the nineteenth century.